Fair Questions: Why do religions say there are terrible consequences for believing the wrong things?

I was recently posed a question related to why a religion would propose such severe consequences (hell, specifically) for having the wrong beliefs.  Additionally, why do almost all religions propose that there are terrible consequences for wrong beliefs about the spiritual world?

That's a great question, and it's one I want to answer by looking at it through the lens of evolutionary psychology (at least in the sense that we'll see how evolutionary pressure shaped our psychology).

Let's imagine for a moment that you live in the ancient world, before most of the comforts we take for granted were developed, and then think about how that might shape your fundamental assumptions about how the world works.

If you believed the wrong thing about where to hunt the best game, you might go hungry, and in your weakened state, fall prey to illness or another predator...and die.  If you believed the wrong thing about the right time to plant crops or harvest crops, the same results might obtain.  Over and over, you would see quite clearly that having wrong beliefs about the world and how it works often lead to terrible consequences for people.

To you, terrible consequences for wrong beliefs about the world would just be a feature of the world as obvious as the land you walked on and the moon above your head.  And because most people saw no clear division between the material world and the spiritual world, it would be natural to believe that this principle applied to the spiritual world as well.

It also makes sense that as we grow more distant from the constant harsh survival pressure under which our ancestors operated, we would find it increasingly difficult to understand their intuitive conclusion that the wrong beliefs could lead to spiritual death as easily as material death.

This may be why the idea of Naraka, Diyu, Mictlan, Jahannam, Tartarus, and so on are relatively uncontroversial amongst the ancients.  For them, these terrible consequences were just as natural as the terrible consequences for getting lots of other beliefs wrong; they noticed that when they got it wrong, there was hell to pay. 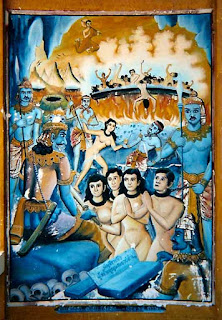 Note: The above is a painting of a Buddhist hell (naraka) from Thailand in which people are being judged and thrown into a vat of boiling oil.
Posted by Samuel C Bunch at 6:38:00 PM