There is a view among some Christians with at least a fair amount of historical background that Islam is a Christian heresy.  This is a proposition that could be offensive to many people and provoke a cessation of critical thought as a result.

Understandably, our Muslim brothers and sisters who believe in the uniqueness and truth of Islam might be offended at the suggestion that their religious tradition is reducible to an incorrect Christian belief.  Others might be offended not because they see Islam as unique in its practices or truth claims, but because they see religions as roughly equally good or bad, and thus for them the concept of heresy is either meaningless or laughable because in their view religious truth claims are either all true or all false.

As someone who counts faithful Muslims and cultural Muslims among his friends, and someone who has studied Islam and read an English translation of the Qur'an, as well as someone who has prayed with Muslims, I would like to explore the question of whether or not Islam is a Christian heresy in an honest way which is not accusatory or derisive.  Unlike the folks who believe that religions are all basically the same (for good or ill), I recognize that Islam makes some unique truth claims in sometimes unique ways.  I believe that we should respect Islam by treating it with the seriousness it deserves, because if it is true, then we must change our lives or face horrible consequences.

In answering the question of whether or not Islam is a Christian heresy, we need to examine two issues:

1.  Does Islam contain Christian heresy in its core beliefs?
2.  If so, then can the whole of Islam be reduced to those core beliefs?

It is also claimed in the Qur'an that Jesus did not actually die on the cross, but only appeared to die on the cross.  This is a Gnostic heresy found in Gnostic texts like the Apocalypse of Peter, for example.

These are both Christian heresies, and both are found stated explicitly in the Qur'an, which is the authoritative repository of Islamic core beliefs.  So the answer to Question 1 posed above is, "Yes."  Islam contains Christian heresy in its core beliefs.

To address the second question, we need to think about what Islam is as a whole.  In order for Islam to be a Christian heresy, it must be a Christian belief system which happens to contain some serious doctrinal error to which it holds persistently.  Arianism was a Christian heresy because it was otherwise Christian in every way: in terms of liturgy, Sacred Scripture, ascetic practices, spiritual sensibility, and most doctrines.  The same was true of Pelagianism, and a variety of others.

But that simply isn't true of Islam.  According to the Qur'an and Muslims who adhere to it, what they are practicing is better than Christianity, a simpler and pure religion that avoids the corruption and perversions of Jewish and Christian doctrines which strayed from the straight path of Abraham (Ibrāhīm in Arabic).  Their religion isn't centered around the story of Christ, but rather around the teachings of the Prophet Muhammad revealed in the Qur'an and recorded in the hadith, the accounts of the sayings and actions of the Prophet Muhammad.

To be fair to those who do believe that Islam is a Christian heresy, there is a better argument to be made that most Muslims are by definition heretics from a Christian perspective.  While Islam may not be a Christian religion, devout Muslims do have faith in Jesus to a certain extent.  They believe that he was a true Prophet sent by God (though his message was corrupted by Christians), that he was born of a virgin named Mary, that he was a holy and righteous man, that God saved him from death, and that he will return with power on the Day of Resurrection.

I suspect that Islam is treated differently in this regard because it is the only major world religion to arise after Christianity which has explicitly recognized parts of Christianity as true and also offered explicit theological critiques of Christianity's doctrines in its own sacred text.  I understand that, for those reasons, it is tempting to put Islam in the unique position of being the only major religion to be labeled "a Christian heresy" while other religions are only described as having heretical beliefs.

I hope that those who do believe that Islam is a Christian heresy also understand my reasons for disagreeing with their position.

Related: What does the Qur'an say about unbelievers, Jews, and Christians?

The Other Side: Hilaire Belloc's Historical Argument for Islam as a Christian Heresy 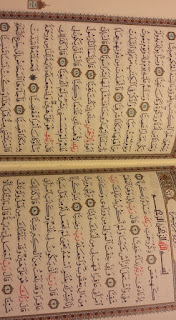 Note: The above is an image of a copy of the Qur'an opened to the "Maryam" surah.