The Jewels of the Mālā

I recently acquired a mālā at no cost to me and (unsurprisingly to anyone who knows me) felt compelled to do additional research on them.  I was aware of the existence of what we in West generally call prayer beads within Buddhist traditions.  But that was about the extent of my knowledge.

That might seem surprising to the people who know of my strong interest in Buddhism from my writings on it and are also familiar with my series on Buddhist meditation.  That's perfectly understandable, though I have to admit that I'm hardly an expert on Buddhist spirituality in general; I've only practiced some of the meditation techniques.

I've been more regularly using prayer beads that were designed as an aid to prayer over the past year, from both Christian and Islamic stylistic traditions: the rosary and the misbaḥah, respectively.  Because of that, my interest in the mālā has increased enough to prompt me to try it and assess the similarities to and differences between the Islam, Christian, and Buddhist methods of using prayer beads.

Some of those Buddhist (and Hindu) methods, like chanting the name of a Buddha or a mantra that has special meaning to the practitioner are very similar to other uses of prayer beads.  The use of the mālā to count prostrations isn't quite so similar.  Neither is using the mālā to count one's breaths during meditation.

I tried using it to count each during meditation, and I found that it was more of a distraction from emptying my mind than anything else.  On the other hand, it is quite soothing to breath and count the beads for a while.  I could see that being a helpful practice, especially for someone who is new to meditation.  Or new to Buddhism, for that matter.

The mālā isn't just a useful tool for beginning or continuing in the Buddhist spiritual life, though it is indeed useful for that purpose.  It's also a method for Dharma transmission, though not in quite the same sense as a teacher who has a formal place in the lineage of Buddhist teachers.  While it may not be a person, the mālā can still teach us.

It is these Three Jewels that formed the first mantra, a recitation of the refuges repeated over and over again while passing over the beads of the mālā.  In this way, the practitioner of Buddhism not only gains the soothing benefits of rhythmic breathing and chanting, but also repeatedly re-immerses himself in the light of the Buddha's teaching which shines from the Three Jewels.

The Jewels of the Mālā are the touchstones we use to keep ourselves on the path to the other shore of the River of Sorrow which is this life, the seeds which can grow into the flower of insight which floats gently upon the river, and the beautiful prisms through which we can glimpse the lighthouse standing firm on the other shore to guide us to enlightenment. 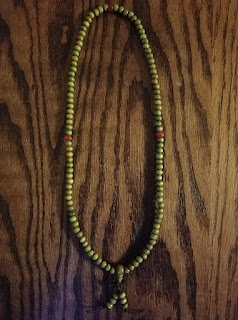