Fair Questions: Is the Mormon faith a Christian religion?

The Church of Jesus Christ of Latter-Day Saints is famous in the United States, and probably in many other places.

There are many religious groups in the United States which claim to be rooted in the teachings of Jesus Christ, and so it is not this claim that makes the faith of the nice young men and women who evangelize on college campuses so controversial or even an object of scorn for some folks.

Nor is it the practices that mainline Protestant or post-Reformation Christian groups in the United States find to be very weird (such as temple garments or baptism for the dead) that make it so controversial among Christians, though some do unfairly scorn the folks generally called Mormons for these practices.

What makes the friendly purveyors of the Book of Mormon (you can access it for free at the LDS website) significantly different from the typical Christian evangelist is precisely that they are offering "another Testament of Jesus Christ" to a majority-Christian public that has often believed that the New Testament was also the last testament.

It wasn't until I researched the LDS website to learn more about their doctrines, and had studied more Christian history, and had become concerned about applying consistent standards to help mitigate my confirmation bias, that I realized that it was time to re-examine my view on this question.

In the same way, Islam is clearly a new religion because it has a new revelation compiled in a text that was viewed as superseding the Jewish and Christian interpretations of the Torah and the Gospels while preserving what was true in the texts.  While Jesus features in the Qur'an, it's abundantly clear that he is not the same figure described in the New Testament.

The implication of this standard is pretty clear for the Mormon faith: The new revelations handed down to us by Joseph Smith results in the Book of Mormon, which is viewed as superseding the Torah and the New Testament writings of Christianity.

The same applies with Buddhism: we know that Buddhism was heavily influenced by earlier Indian spiritual traditions, but we also know that Buddhism has its own distinctive revelation compiled in the Pāli Canon that supersedes the Vedas.  The same thing is true of the Jains and their sutras and their founder Mahāvīra.

In light of this, I was left with the uncomfortable conclusion that the Mormon faith isn't a Christian religion, that it's something new and distinct.  I changed my mind on the matter.

What I have not changed my mind about is the profound wrongness of anti-Mormon bigotry.  The way many Americans look down on or make fun of Mormons because of their uncommon beliefs or missionary activities or even sometimes because they think they're not true Christians is still wrong in my view.

Even if it's true that Mormons aren't Christians, we should still treat them with love. 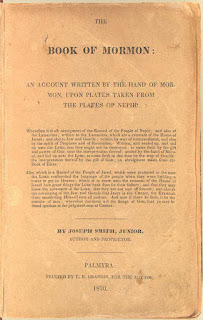