There are a lot of things that folks who are part of the Progressive political movement get wrong about Christianity.  But there's one very important area where they often understand Christianity better than their political opponents: how powerful its theology is for motivating social change.

That's why the Progressive movement has been so long engaged in an attempt to colonize Christianity, seeking to conquer it and use its theological resources for their political project of expanding and rendering more just the Imperium of Western Liberalism (called Conservatism in some places where Liberalism has become traditional).

They see that the teachings of Christianity are a goldmine for those who are greedy to rid the world of inequity.

The Christian Tradition subverts the disorder of inequities resulting from our sinful attachments to wealth and clinging stingily to our own gifts.  This tradition of a radical call to give up what we have been given to help those who have so little continued in the practice and preaching of St. John Chrysostom on helping the poor and abandoning the love of wealth, and hundreds of years later in St. Dominic's act of selling his books to feed the poor (inspiring many others to help in the process).

It continues to this day, 800 years after the time of St. Dominic, in Pope Francis' exhortations to reduce our unnecessary activities because of the impacts of our global economic systems and environmental practices on the poor as well as touching their hearts and filling their hands.  From the beginning until now, Christian teaching has inspired many people to dedicate their lives to giving of themselves to help those considered the least among us.

The Sacred Tradition begins, of course, with Christ's teachings in the Gospels.  Christ commands those who are deemed the greatest to focus on addressing the needs of those who are deemed to be the least.  He enjoins the young rich man to sell all that he has and give it to the poor.  He proclaims that those who seek the first place of honor shall be given the last.

He served those who were outcasts because of their affliction of leprosy or blindness or hemorrhages, those who were prostitutes, and even those who were cooperating with the Roman Imperium that was oppressing His people in Israel.  He died on a Roman cross for the sake of loving those who despised Him among the people of Israel.

This is the quintessential response of Christ to inequity: He offers everything that He is so that we may be raised up in glory to be like Him.  To accept this, we too must take up our cross and follow Him to lay down our short lives of toil and worry so that we can then take up the new and eternal life of Love alone.

Christ's response to inequity is not the response of Western Liberalism which seeks to level the playing field so that it's a fair game.  Fair in this case means that the outcomes vary based on the strengths and resources of the individual, which means that the sleek and the strong often still rule the weak.  Under the reign of Western Liberalism, they have all the freedom necessary to dominate and manipulate their least brothers and sisters.

By contrast, the Christian response to inequity is to pour generously from the cup of our gifts into the cups of those who lack those gifts; the rain of love upon the just and the unjust alike.  We do this in imitation of Christ who poured out His saving blood for us, we poor and unjust sinners who cannot buy salvation and have not the strength to reach it ourselves. 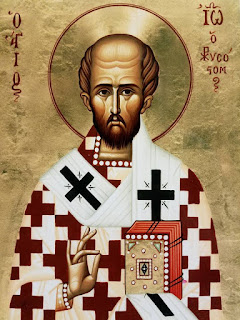 The above picture is one that I took of an icon I purchased from the Holy Transfiguration monastery via bostonmonks.com.
Posted by Samuel C Bunch at 7:00:00 PM