Fair Questions: How do religious doctrines confer an evolutionary advantage?

One of the questions that came up during the podcast that Sam Harris did with Bret Weinstein surprised me, although it shouldn't have. Bret's answer to that question also surprised me (and seemed fairly surprising to Sam Harris as well), but not in the sense that it cut against my intuitions about what the correct answer would be.

I was just surprised that he generally agreed with my answer, because other left-libertarian evolutionary biologists don't strike me as the sorts of individuals who ever would agree with me on this topic.

When Bret mentioned that he believed that specific religious doctrines had evolutionary value, I thought, "Well, of course."  It seems very obvious that they do, given how pervasive religion is, and how evolutionary processes work.

The more interesting question is how that plays out with regard to certain doctrines, and that's what Sam Harris brought up very effectively with his example about the Catholic doctrine of transubstantiation.

I can understand why Harris chose transubstantiation as his example.  It's not obvious how that might confer an advantage in evolutionary terms.

One the other hand, the moral doctrine of the Catholic Church which states that it is wrong to use artificial contraceptives for selfish ends is much easier to understand as a doctrine that lends to evolutionary fitness.  It's a doctrine that provides an incentive for those who are Catholic to be open to having more children, and that's generally going to improve evolutionary success for those Catholics, ceteris paribus.

But it isn't just the one doctrine.  Bret's point that the structure of the religion has to be doing a lot of the work is a useful one, I think, for understanding the value of religion in evolutionary terms.  Most people who are opposed to religion will admit that the communities formed under the banner of religion are strong and people find it difficult to leave those support systems.

This robust social support system as a function of religion has fairly obvious evolutionary value as well.  But what is less obvious is how the intellectual structures of a religion confer an evolutionary advantage.  Here is where I have some ideas to offer, although I'm afraid that I'm offering them in an overly simplistic formulation.

Let's take Buddhism as an example.  Buddhism, when it is practiced (either to a greater or lesser degree) tends to reduce an individual's attachment to seeking pleasure and avoiding pain.  And this allows individuals to act both more rationally and more compassionately, because the huge barrier we have to being more rational and compassionate is our inordinate focus on short-term interests that tends to lead to shorter and/or less healthy lives and thus fewer offspring in many cases.

So Buddhism's focus on reducing our attachments to seeking pleasure and avoiding pain for their own sake helps us mitigate behaviors that will reduce our evolutionary success, because it improves our ability to make rational decisions about resource utilization and fosters more pro-social behaviors.

But even within that general framework, we still can't easily explain how something specific and more spiritualized like the Mahayana Buddhist teaching on the transference of merit or the Roman Catholic teaching about indulgences fits into this picture.  Nonetheless, I actually think it is explicable, albeit in a more subtle way and with some difficulty.

Both of these practices function to help us become less selfish the more we practice them.  They may seem like mere pie-in-the-sky magical thinking to those who don't share their respective cosmologies, but what they are doing to us is gradually making us less likely to engage in the sort of immature short-term pleasure-seeking and pain-avoidance behaviors that ultimately make us less successful from an evolutionary standpoint.

They do this in a couple of ways.  First, because these practices are prompting us to keep our focus on something other than ourselves, they are training the mind to be less self-centered in how it deals with the world.  Second, because these practices take up the time that we might otherwise be inclined to worry about pleasure and pain, we are less likely to enter a downward spiral of anxious thinking and go back to our less valuable behaviors (from an evolutionary standpoint) in those moments.

These practices are just a small sample of the myriad religious practices that serve the same basic functions, and both ancient Buddhist and ancient Christian religious traditions have huge collections of such practices that together are a fairly comprehensive training program for reducing the ill effects of egotistical thinking and behavior.  (Click here for more examples of this in the Catholic Church)

So most of the doctrines of religions are a part of the intellectual framework that help promote pro-social behaviors, reduce our reliance on transient pleasures that drives much of our egregiously irrational behaviors, and provides a motivating narrative for us as we navigate a difficult life.

The Roman Catholic teaching on transubstantiation or the Mahayana Buddhist teaching on the Buddha-nature may seem very far away from being valuable in terms of evolutionary success, but they are highly important as motivators.  If you believe that God has given Himself to you for your salvation, and that He has gone so far as to give you His very body, that's a strong motivation to keep going in the face of struggles that might otherwise cause you to fall into fatalism.

In a similar way, if you believe that your Buddha-nature means that you have an opportunity to transcend all the suffering of this world, that's highly motivating and may keep you going through rough times so that you can have more offspring and be more successful from an evolutionary standpoint.

It may be that there are specific religious doctrines that, individually, are almost impossible to understand as useful in light of evolutionary processes, but I suspect that taken as a whole body of beliefs, most religions have pretty obvious evolutionary value.

Unless, of course, you're already committed to the view that they couldn't possibly improve human fitness from an evolutionary standpoint.  And then it would be very difficult to think of those reasons.

Related: Fair Questions:  How did religion help us survive?

Fair Questions: What did I learn from visiting an Eastern Orthodox parish regularly?

For a couple of years, I attended the Divine Liturgy at the local Eastern Orthodox parish on average at least once a month, sometimes more.  It was and still is an Antiochian parish, whose Patriarch is currently John X.  I met many very kind people there over those two years, and I recently attended the elevation of one of them to the rank of Proto-deacon.

It was a beautiful liturgy presided over by the current bishop of the diocese, whose name is Anthony.  One of the things I learned from attending the parish was an appreciation for the ancient liturgies, whether it was the Divine Liturgy of St. John Chrysostom that was the standard at the parish, or the Divine Liturgy of St. Basil the Great which was used for Great Lent.

It spurred my interest in learning more about the Divine Liturgy of St. Gregory the Great (which most people know as the Roman Catholic Mass) and the Divine Liturgy of St. Mark (an ancient liturgy used by our Coptic brothers and sisters).  I really enjoyed the opportunity to study the ancient liturgies of the Church, and also the opportunity to remedy some of my ignorance of Eastern Christianity in general.

I began having a pronounced interest in iconography after being exposed to the wonderful icons at the parish, and that has lead to a wonderful deepening of my knowledge of both Byzantine iconography in particular and Christian art in general.  I have been giving a plethora of icons as gifts since then, spreading the faith through beauty.

I'm very grateful for these opportunities to learn more about Eastern Christianity, and it was of great value for me as someone who was really only viscerally familiar with Western Christianity prior to this point.  I was raised in Protestant denominations (initially Church of Christ and then Pentecostal) and entered the Catholic Church by way of the Roman rite.

One of the important things I learned is that the virus of modernity is beginning to infect the Eastern Orthodox communities in the U.S. as well.  I had thought that they were resisting it, but as I've become more connected to them both in-person and on the Internet, it's become obvious that they are facing much the same struggles the Catholic Church has been facing, albeit on a delayed timeline.

The push for a greater role for women in the liturgy is alive and well, and this is especially focused on the role of deaconesses much as it is in the West currently.  Laxity is a problem for many, as it generally is in the convenience-oriented and consumerist American culture.  In both cases, it's not clear how things will play out over the long term.  I certainly hope for the best.

I also learned that Byzantine chant is rather different in important ways from Gregorian chant.  I've been learning to chant the propers for Mass for the last couple years, and I notice that while Western chant and Eastern chant share a common heritage, they have become somewhat distinct musical traditions over the past two millennia.

I've also learned about the similarities and differences among the monastic traditions of East and West, and the theological and ecclesiological disagreements that help cement the schism between the Eastern Orthodox intercommunion and Catholic communion.  I've seen the efforts at bridging the schism and reaching toward a re-unification, and of course I pray that we may all be one.

Perhaps most importantly, I've learned that restoring the unity of the Church is not primarily a matter of policy or theology.  It's the local integration of the communities, and the love between them, that most needs to be cultivated in order to re-unify what is now only partially in communion.

And it's us as individual members of our respective parishes that have the power to bridge the divide between the East and West, bringing full communion a little bit closer in our lifetimes by recognizing that we aren't one yet, and that we need to humble ourselves in order to become truly one body.

Related:  Why am I not Eastern Orthodox? 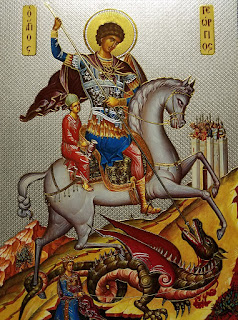 The above picture is one I took of an icon of St. George, the patron saint of the parish I attended.
Posted by Samuel C Bunch at 7:12:00 PM No comments: