As I've mentioned before, Rumi is far from the only Islamic mystic, but he's the poet most likely to be familiar to the Western reader, so his work is a good place to start in examining the subject of Islamic mysticism.  It's valuable to point out that although Jalāl ad-Dīn Muhammad Rūmī himself seemed to believe that he was authentically following the teachings of the Prophet as they were received from Allah in the form of the Qur'an, there are plenty of Muslims who find some of his statements to be inimical to Islam.

In his notes, the translator (Coleman Barks) for The Essential Rumi points out that Rūmī has fashioned a theory of language around the reed flute (probably the Turkish ney of his day), one of the important instruments of classical Turkish music.  He provides this as an immediate preface for the following poem:

"Listen to the story told by the reed,
of being separated.

'Since I was cut from the reedbed,
I have made this crying sound.

Anyone apart from someone he loves
understands what I say.

Anyone pulled from a source
longs to go back.

At any gathering I am there,
mingling in the laughing and grieving,

a friend to each, but few
will hear the secrets hidden

within the notes.  No ears for that.
Body flowing out of spirit,

spirit up from body; no concealing
that mixing.  But it's not given us

to see the soul.  The reed flute
is fire, not wind.  Be that empty.'

Hear the love fire tangled
in the reed notes, as bewilderment

melts into wine.  The reed is a friend
to all who want the fabric torn

and drawn away.  The reed is hurt
and salve combining.  Intimacy

and longing for intimacy, one
song.  A disastrous surrender

and a fine love, together.  The one
who secretly hears this is senseless.

A tongue has one customer, the ear.
A sugarcane flute has such effect

because it was able to make sugar
in the reedbed.  The sound it makes

is for everyone.  Days full of wanting,
let them go by without worrying

that they do.  Stay where you are
inside such a pure, hollow note.

Every thirst gets satisfied except
that of these fish, the mystics,

who swim a vast ocean of grace
still somehow longing for it!

No one lives in that without
being nourished every day.

But if someone doesn't want to hear
the song of the reed flute,

it's best to cut conversation
short, say good-bye, and leave."


This poem is quite famous, and many things can and have been written about it.  But I won't be addressing all the many beautiful layers of meaning here and in the larger work of the Masnavi.  The one important image I want to begin with is that of the reed flute, because it represents the human being as a symbol of the absolute via the reed and the human longing for union with Allah via the music it produces.

In this poem, Rūmī tells us that the reed flute is fire, not wind.  That is to say: we human beings are not merely a blowing wind, but a dancing fire.  Or at least that we can be a dancing fire when we empty ourselves of desires other than the love of God, moving ever to the sound of our longing for the divine life of love.

"Don't worry about saving these songs!
And if one of our instruments breaks,
it doesn't matter.

We have fallen into the place
where everything is music.

The strumming and the flute notes
rise into the atmosphere,
and even if the whole world's harp
should burn up, there will still be
hidden instruments playing.

So the candle flickers and goes out.
We have a piece of flint, and a spark.

This singing art is sea foam.
The graceful movements come from a pearl
somewhere on the ocean floor.

Poems reach up like spindrift and the edge
of driftwood along the beach, wanting!

They derive
from a slow and powerful root
that we can't see.

Stop the words now.
Open the window in the center of your chest,
and let the spirits fly in and out."


When we move our entire lives to the sound of the music of our heart's profound yearning for that divine life of love, the breaking of the small things to which we are attached in this life no longer worries us.  We become free of the burdensome dance of acquiring more possessions or more worldly honors, and for us all the world is suffused with the music of love, a pure love which is directed toward the divine life first, and through the divine life, directed toward all that participates in it.

This music of love is less a music of words and more a music of motion, a music that gives life its tempo, a rhythmic shape by which we shape our lives in the pattern of love, making our lives notes in the song of divine love.

"Today, like every other day, we wake up empty
and frightened.  Don't open the door to the study
and begin reading.  Take down a musical instrument.

Let the beauty we love be what we do.
There are hundreds of ways to kiss the ground."


The power of this divine dance music is found most strongly when we share it with others; divine love is ever overflowing the boundaries of our own hearts while we participate in it.  Rūmī teaches us that when we humbly dance according to the divine dance music written on our hearts by Allah, the composer of the soul, our active lives are every bit a mode of prayer and prostration, just as the five daily prayer times are.

When we participate in the divine life, it is the soul which dances, and our body which expresses the movements of the soul's fiery essence.  Oh, to dance to the music of love and life itself!  How vital it is, in every sense of the word.  It is indeed life-giving, life-sustaining, and a symbol of the fire of love we are made to be.

"Daylight, full of small dancing particles
and the one great turning, our souls
are dancing with you, without feet, they dance.
Can you see them when I whisper in your ear?"


It's fairly well known that dancing is important to Sufis such as Rūmī.  It's probably less well known that it's a form of contemplative prayer (albeit involving unusual levels of physical exertion) known as dhikr in the Islamic tradition.  Though tourists seem to like to watch it, Sufi whirling isn't some sort of performance art meant primarily for the enjoyment of the audience.

The dance is a moving meditation, a remembrance of Allah that is pushed along with each turning of the body until it glides continuously on the wings of prayer.

"I feel like the ground, astonished
at what the atmosphere has brought to it.  What I know
is growing inside me/  Rain makes
every molecule pregnant with mystery.
We groan with women in labor.
The ground cries out, I Am Truth and Glory Is Here,
breaks open, and a camel is born out of it.
A branch falls from a tree, and there's a snake.

Muhammad said, A faithful believer is a good camel,
always looking to its master, who takes perfect care.
He brands the flank.
He sets out hay.
He binds the knees with reasonable rules,
and now he loosens all the bindings and let his camel dance,
tearing the bridle and ripping the blankets.

The field sprouts new forms,
while the camel dances over them, imaginary
plants no one has thought of,
but all these new seeds, no matter how they try,
do not reveal the other sun.
They hide it.
Still, the effort is joy,
one by one to keep uncovering
pearls in oyster shells."


After we have learned to follow God's law, separating ourself from all might draw us away from the eternal substance of the divine life and toward the ephemeral pleasures of mere worldly comfort, we are then freed from the bindings of the law.  They have kept us from our temporary longings, and in the space left in our hearts, we are gradually able to water and grow the seed of love into a flourishing plant whose leaves reach out for the rays of the divine life.

The music of our souls grows into an eternal symphony, a song dedicated to the divine love which leads us back to the Garden, the unveiling of the divine mystery in which we delight as the lover delights in a lifetime of learning ever more, little by little, of the beloved.  Oh, how we enjoy finding the pearls of love underneath the hard shells of those we love!

"All day and night, music,
a quiet, bright
reedsong.  If it
fades, we fade."


And so we dance, moving our lives to the divine dance music that Rūmī kept playing as the song of his own life, seeking always to move to the beat of the song of Allah, the song that plays quietly all day and all night.  A song that we can only hear when the soul is quiet, listening for love itself which is the foundation of life itself.

Rūmī knows that without the divine dance music of the soul's yearning for the love of God, we fade into nothingness.  In the end, we are nothing without the love and the longing for love planted in the reedbed of the divine ground of all that exists. 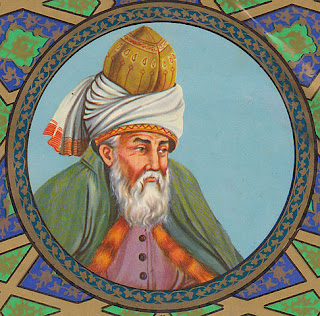 Note:  The above is an artist's rendering of Rumi's portrait.  To see what I used to gather the Rumi quotations, see my Sources page.
Posted by Samuel C Bunch at 7:57:00 PM