The Death of "Death of God" Theology

I read an article in First Things magazine a few months ago that has stuck with me an unusually long time.  It was entitled "Death of God Fifty Years On" and in it the author (Matthew Rose) described how Death of God theology was born.

Paul van Buren was one of those labeled as "Death of God" theologians.  Interestingly, the New York Times quotes him as saying, "The so-called death-of-god movement is a journalistic invention."  His goal was apparently not to proclaim, with Nietzsche, that "God is dead."  Rather, he seemed to take it for granted that "God" didn't mean the sort of transcendent and immanent ground of being described by classical theism.

Because he believed that the term "God" as traditionally understood was empty of meaning, his project was, "trying to find an utterly nontranscendent way of interpreting the Gospel."  He wanted a Divine Command theory of morality derived from Christian scripture, but without the "Divine" part of it.  On the other hand, we have Thomas Altizer.

Thomas Altizer did proclaim, with Nietzsche, that "God is dead."  But he didn't stop there, perhaps because to simply agree with Nietzsche would just be boring.  And Altizer, to his credit, wasn't a boring thinker.  He went beyond Nietzsche's claim that Christianity's practice of self-denial in the pursuit of truth eventually leads to the death of belief in God.  Nietzsche wrote:

"Unconditional honest atheism (and its is the only air we breathe, we more spiritual men of this age!) is therefore not the antithesis of that ideal, as it appears to be; it is rather only one of the latest phases of its evolution, one of its terminal forms and inner consequences--it is the awe-inspiring catastrophe of two thousand years of training in truthfulness that finally forbids itself the lie involved in belief in God."


Thomas Altizer agreed with Nietzsche that God was dead, but in his view, it wasn't the inevitable end-product of Christianity.  Instead of a deicide at the hands of Christians, it was a suicide-by-Romans.  Though it might seem as though he were an atheist (and that's probably technically true), Altizer has described himself in an interview as "a committed radical Christian who has been inspired both by the Radical Reformation and by radical Christian thinkers and visionaries from Paul through Joyce."

He truly believed the God was dead, and had died on a Roman cross.  He recognized that this was a radical (and heterodox) Christian view, but nonetheless a Christian one.  It might seem that Christian atheism is a logical impossibility, but he managed to bring it about.  He brought together a contemporary disbelief in God and a surprisingly High Christology in his theology.

More often, Christian atheists have a Low Christology, believing (like Paul van Buren) that Jesus wasn't the incarnated transcendent God, but rather just a good moral teacher, or a radical political figure worth following, or something similar to those ideas.  Altizer's view was the apotheosis, if you will forgive the pun, of the Christian atheism of the post-WWII West.

He certainly wasn't the beginning of Christian atheism in the WWII era, however, and we must give credit to Dietrich Bonhoeffer here.  Though I don't believe that Bonhoeffer was a Christian atheist, some of his later writings from prison in Nazi Germany do speak in ways that sound like a belief that God has abandoned us to our own devices, and according to Matthew Rose, Bonhoeffer proposed a "religionless Christianity" that is a necessity because "God is teaching us that we must live as men who can get along without him."

In the spirit of charity, I think we ought to assume that being imprisoned (soon to be executed) for opposing Adolf Hitler would prompt some morbid reflections for anyone, and that it's unlikely that Bonhoeffer recanted his dearly-held Lutheran faith.  Nonetheless, these reflections capture the spirit of the WWII-era disbelief in God and the idea that we can and must do without religion, particularly the Christian religion.

Like French-Algerian atheist Albert Camus, many people struggled with the idea that God would allow human beings to bring about the horrors of WWII: the fire-bombings, the nuclear bombs, the trench warfare in Europe, and of course the Holocaust, Hitler's grand final solution to the "problem" of the kinds of people he didn't want around.

And what, in the end, did theologians like Paul van Buren and Thomas Altizer offer them as a way to retain Christianity while accepting that God, at least as they had understood Him before, was dead in either a literal or figurative sense?  Not much, it turns out.

Most people who believed that God's existence had been falsified by the events of WWII would have recognized that Christianity didn't make much sense unless it was rooted in divine revelation.  And most atheists of Christian heritage today don't feel any need to explicitly retain much of that heritage.

Sure, they often believe some of the basic moral precepts (though they may not apply them in the way that Christians traditionally have).  But they don't feel a need to reconcile the Bible with their Christian moral views, because what is there to reconcile with an out-of-date text that says very little worth hearing?  Without a transcendent divine inspiration, the Bible isn't worth wrestling with, from their perspective.  And understandably so.

Thus, the manufactured "Death of God" theology movement died pretty quickly, and we might wonder whether it had truly lived.  Whether the "God" of the Bible was never really a live option, as Paul van Buren saw it, or God had truly died for us on the Roman cross and wasn't coming back, as Thomas Altizer saw it, there was no reason to take the Bible or Christianity seriously anymore.

And so many people didn't.  Ironically, the Christian theologians who disagreed with Nietzsche may have proven him right.  After all, they did, because of their commitment to truthfulness, eventually forbid themselves the lie involved in believing in God. 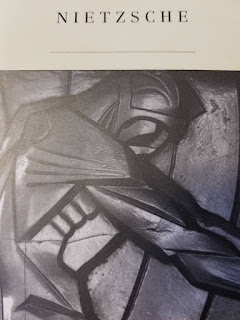 Note:  The above image is part of the cover of my copy of Nietzsche's collected works.
Posted by Samuel C Bunch at 5:52:00 PM