I once thought of the Rosary as a Marian devotion, but as with many things I once thought, I have since discovered that I was wrong.  I was convinced that the fact that the Hail Mary is used so many times and the Hail Holy Queen is often prayed after the Rosary meant that the exercise was all about Mary.  And though I'm perfectly content at this moment to petition Mary to pray for us (Ora pro nobis is the Latin phrase), I wasn't always so content.

Coming as I do from a Protestant background, for many years I simply wasn't particularly interested in any Marian prayers.  I didn't have any experience that would draw me into it; unlike for many cradle Catholics who were exposed to traditional Roman Catholic devotions fairly early, the Rosary was outside my frame of reference and just seemed altogether foreign to me.  And the same was true for the Catholic Church's teachings on Mary, Queen of Heaven in general; I just found it strange.

And then I made the fateful mistake of trying it for myself in order to understand it, as I do with so many religious practices.  On top of which I made the other mistake that I make all too often: I researched it and learned more about its development.  The results were not what I expected at all, either with regard to the experience of praying the Rosary or performing the research.  I was shocked to find that the tangible beads helped me to focus on the prayer rather than distracting me from it, and I was surprised to learn how old it is.

One thing I did expect is that the Rosary would be long and complicated to learn, particularly in the popular contemporary form.  That is probably why I prefer the Dominican approach to the Rosary which is somewhat simpler without losing any of the power of the prayer.  One thing I didn't expect is how wonderfully meditative the complexity of the prayer could be.  My experience with Buddhist meditative practice was that of utter simplicity, of letting go of even the ego so that a suffering-free emptiness occurred in which the "I" disappeared and the mind was integrated.

My experience with the Rosary is that the ego is left behind as we fill our minds and hearts with the story of Love, the Mysteries (Joyful, Luminous, Sorrowful, and Glorious) which unfold the history of  our salvation before us and help us to learn to cooperate with the grace we received through Christ.  The Mysteries upon which we meditate as we recite the prayers from the heart of the Church lead us always to Christ, beginning to draw us into His story with the Incarnation, reminding us of His Baptism, giving us something to hold on to as we weep at His Crucifixion, and showing us that the Resurrection is the beginning of the never-ending story into which Christ invites us.

The Rosary is kerygmatic; it proclaims to us each time we pray it the irreducible Gospel of Jesus Christ, taking us as it does through the whole of Christ's life on earth and leading us to life with Him in Heaven.  The Hail Mary also takes us through the life of Christ, from the time it was proclaimed to her, "The Lord is with thee." to the reminder of Him who was borne by her in the womb, "Blessed is the fruit of thy womb, Jesus." and to the end of the story for us, which is our death, the moment we can join Him in the never-ending story in the Divine Household.

"Pray for us sinners, now and at the hour of our death." reminds us of our need for a Savior who can cleanse us of us sin when we turn to Him in repentance and hopes for the grace of final perseverance in uniting our sufferings to Christ.  As always, Mary points the way to Christ and shows us how we ought to love Him who loved us unto death. 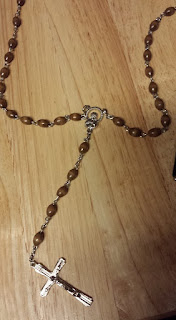 Note:  The above is an image of my rosary which has the Sacred Heart of Jesus depicted in the medal which joins the decades to the crucifix.
Posted by Samuel C Bunch at 6:41:00 PM