The life of a Christian is to be a holy offering, a public service offered to God to show our love for His super-abundant gifts to us.  This service has three parts for each of us as we imitate the three services by which Jesus Christ fulfilled the roles of the people of God, the service of a priest, a prophet, and a king.

In the Latin tradition, this is often referred to as the triple munera: the sanctifying, teaching, and governing offices of the Church.  Though these roles are performed in a special way by the bishops who are the successors of the Apostles chosen by Christ to serve His Church in a spirit of love as He served them in a spirit of love, we all have a call to participate in those roles.

This includes those who by baptism are incorporated into the Body of Christ, participating in the priesthood of the People of God.  St. Mark is among those called by Christ to priesthood under the new covenant, a relative of Barnabas the Levite, a priest under the old covenant.  The nature of the priesthood under both old and new covenant is that of offering costly sacrifice for the people of God, and St. Mark certainly did so.

According to Church tradition, he was the first bishop of Alexandria in Egypt, and was martyred in the streets of Alexandria for his faith, making the ultimate sacrifice for the love of Jesus the Son of God who was his friend and Master.  It was this sacrifice on the cross he recorded in the Gospel of Mark, a great deal of which was taken from the sermons of Peter that Mark heard while in Rome with Peter the Apostle.

Mark is depicted in many illuminations of the Gospel writers upon the cover of the Evangelion and the sides of a lectern (ambo), sometimes by his symbol which is the winged lion.  He is still commemorated in the Divine Liturgy of St. Mark, an incredibly ancient liturgy which is still celebrated by Christians to this day.  The liturgy is a sacrifice of praise at which the sacrifice on the cross is present timelessly, and it is in this priestly sacrifice of priestly sacrifices that Mark who is one of the first priests of the new covenant lives on as an icon of Jesus Christ, the living God who is the High Priest of the new covenant.

Mark the Evangelist is my patron saint, chosen when I was confirmed in the Catholic Church, and I often pray that I may become more like Mark who followed faithfully in the footsteps of Christ on the via dolorosa and made himself a living sacrifice, his blood poured out for the love of all like Christ's Precious Blood was poured out that all might have the chance to be saved through Him.

Lord, please help me by Your grace to be a true friend to You, to be willing to help spread Your love across the world, to faithfully record the great and glorious love of God for all to read, and to make my life a living sacrifice for Your sake as you made Your life a living sacrifice for the sake of my restless soul so that it might find its rest in Your heavenly household. 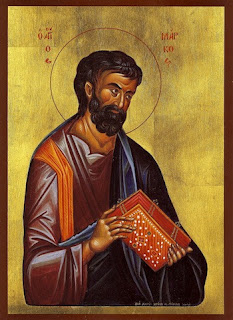 Note:  The above is an icon of Mark the Evangelist, whose name I took when I was confirmed in the Catholic Church.  I recently purchased this icon from the Paracletos monastery.
Posted by Samuel C Bunch at 5:19:00 PM