The Weight of the Scapular

Recently at a Christmas party, I was given a brown scapular by friends I've seen wear the scapular continuously.  For the new year, I had wanted to begin a new commitment to daily prayer beyond what I was already doing.  And the scapular was given to me at just the right time to do that.

So earlier this month, I asked the pastor at my parish to perform the blessing and investiture for someone who begins wearing the scapular.  After we prayed, he advised me of the duty to perform one of the specified penances, and I affirmed that I had committed to praying 5 decades of the rosary every day.  Which I have, and it has been very good for me.

I've had a very stressful month at work so far, from New Year's Eve onward, and the added prayer time has been very helpful in de-stressing and refocusing before I sleep.  I find that prayer in general is good for that, especially at the beginning and ending of the day.

Unlike some Roman Catholics, I'm not overly concerned about the indulgences attached to praying with the scapular and kissing it devoutly.  I figure I've earned whatever time in Purgatory is given to me, and I'm not in a hurry to take days away here and there.

I'm also not treating it as a lucky charm, or as a guarantee of getting to Heaven, though scapulars generally have the associated promise on them: "Whosoever dies wearing this scapular shall not suffer eternal fire".  It may sound like this promise is mere superstition, but the Sabbatine Privilege isn't a Get-Out-of-Hell-Free card.

The requirements attached to the promise are pretty serious:


How many people do you know who are chaste in the Catholic sense of what it means to be chaste?  I know very few.  If one can conquer sexual sins, then growth in holiness to a high degree is very likely to be already occurring.  People who can remain truly chaste are probably the kind of people who are more likely to go to Heaven anyway because they're extremely holy.

Also, people who are sufficiently committed to their practice of Christianity to perform lengthy daily prayers or other penances and wearing the scapular continuously are also the kind of people who are willing to put the effort into developing the sort of close relationship with God that is essential to holiness.

I'm not suggesting that I'm the kind of holy person I just described; I'm certainly not there yet.  Nonetheless, what I'm learning is that the act of committing each day to trying to live up to the requirements of the scapular promise helps me to gradually become more like the kind of person I just described.  I have a long way to go, but the small weight of the scapular is enough to remind me of my Christian duties to God and neighbor.

I noticed the difference today because, for the first time since being invested, I forgot to wear it to work after changing into my work clothes (though I put it on when I got back home).  I put it back on because the weight of the scapular helps to remind me of what's important.

Its weight serves as a regular reminder that I need to pray for those who bear much heavier burdens, that I need to help bear the burdens of others, and struggle to bear patiently my own cross each day. 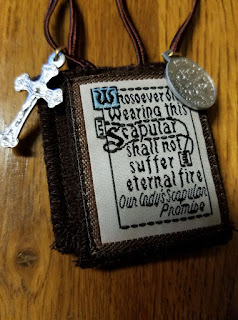