Love it to Death: The Mercy of Love

I was praying a rosary before bed a couple of nights ago, and I was meditating on Christ's carrying of the cross on the road to Golgatha, falling as his body started to falter under the weight of the cross.

As I contemplated this image of Christ, I felt a strong urge to go and help Him carry the cross out of a sense of mercy.  Though it is I who need the mercy of our Lord (Kyrie eleison!), my heart was moved to act in a merciful way as I contemplated his bloody journey under the weight of the cross on the via dolorosa.

I began to wonder how often I had failed to act mercifully toward the many people in my life who were struggling to carry their own crosses of ill health, broken hearts, anxious minds, and wills weakened by addictions to life's comforts.  How often have we failed to be as merciful to His least brothers and sisters as we would happily be to Christ as he carried the cross?

Ought we not strive to treat the Icons of Love, these people made in the image of the living God, with the mercy we would willingly treat our savior?  It is they who need mercy, in its corporal and spiritual works.  Mercy is always active; it requires us to work for the benefit of others.  Mercy is no mere feeling of sympathy or empathy or even a heart wrenched with pity.

Mercy walks up to those who are carrying their crosses and reaches out to help them lift those crosses.  Mercy does not stop at lecturing from a distance or gazing fondly at the one carrying their cross along the difficult path of life; it enters into their sufferings so that they are not borne alone.  To be merciful is to join with those who are suffering under the weight of their crosses and bring out the redemptive quality of suffering by suffusing those who suffer with love.

It is not merciful to throw the crosses of those who suffer to the ground and leave them there, as if their struggles can be left behind and ignored safely, as if their burdens and struggles were meaningless and can be safely abandoned, as if leaving behind the crosses does not inevitably cause others to have to bear the weight of those sufferings for them entirely.

Such is the false mercy of the Pharisees, who rejected Christ's teaching on the permanence of marriage as too harsh, believing that a radical, transcendent, superogatory love was too heavy a cross to be borne by everyone.  If we are truly merciful and thus willing to help all of our brothers and sisters bear their crosses, then their yoke and ours will be easy, and their burdens and ours will be light indeed.

If we support them in living out their marriage vows in difficult times, just as the Good Samaritan supported the man who was beaten and robbed, this act of mercy enables them to live out the radical, transcendent, and supererogatory love to which we are called by Christ.  In doing so, we act with the mercy of Love Himself, the Lord who had mercy on us when he bore the weight of our sins with us and for us as He died on the cross.

Though it is in our power to leave His least brothers and sisters to their own devices or to punish them, in practicing the mercy of Love we instead take up their burdens with them, making them easier to bear so that they can reach their own Golgatha and find the healing that comes from working through our sufferings, the resurrection that follows after the death of selfish attachments for the sake of love.

When we act with mercy in this way, we are fulfilling Love's command to us that we take up our cross and follow Him.  By helping others to carry their crosses, our own cross becomes easier to bear as we carry it along our own via dolorosa, and we participate in Christ's ultimate act of loving to death the weight of our sins.  He is the divine Mercy whose life, death, and resurrection was the ultimate act of mercy toward we who are so loved that He entered fully into our human sufferings.

Christ is the Mercy of Love, the one whose holy Incarnation was and is the answer to our prayer, "Lord Jesus Christ, Son of God, have mercy on me, a sinner."  He is the Mercy of Love whose Ascension to the heavenly household of God the Father showed us the glory that awaits those who are adopted sons and daughters of God.

The Mercy of Love shows us how we must be merciful in order to fully participate in the divine life of love, the full communion of Love which is beyond all telling. 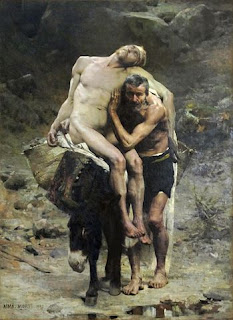