Fair Questions: Does Hebrews 9 refute the Real Presence and the Holy Sacrifice of the Mass?

The following verses from Chapter 9 of "The Book of Hebrews" in the Bible is sometimes used by Protestant thinkers to provide a Scriptural proof for the errors of the ancient churches in understanding the Eucharist as having an inherently sacrificial character while repeatedly celebrating it every week since the days of the Early Church.

"25 Nor was it to offer himself again and again, as the high priest enters the Holy Place year after year with blood that is not his own; 26 for then he would have had to suffer again and again since the foundation of the world. But as it is, he has appeared once for all at the end of the age to remove sin by the sacrifice of himself. 27 And just as it is appointed for mortals to die once, and after that the judgment, 28 so Christ, having been offered once to bear the sins of many, will appear a second time, not to deal with sin, but to save those who are eagerly waiting for him."


The argument is that our understanding of the Eucharist as a sacrifice and our offering it repeatedly is mutually exclusive with the claims in the verses above that (1) Christ does not offer Himself again and again, along with the corollary that (2) Christ's sacrifice occurred once for all time.

Let's make it interesting and point out that if we employ the way of reading Scripture being used by some Protestant thinkers here, then we must conclude that Christ Himself was in error.  Why is that, you might ask?

These statements are pretty clear and are not a single isolated instance that can be read in a reductively metaphorical way.  Christ claimed quite specifically that the wine of the first Eucharist is the blood of the new covenant.

Those two events (of the Last Supper and the Crucifixion) happened at different times.  How could the blood of the new covenant be present in a time prior to the blood of Christ being shed on the cross?

I'm really not sure how that's possible, myself.  But it is exactly what Jesus claimed to be the case.

So either (1) our Lord was correct, in which case His precious blood of the new covenant was present before it was even shed on the cross (and by extension could be present afterwards at Emmaus), or (2) our Lord Jesus Christ was wrong in what He said at the Last Supper, or (3) Scripture is not a reliable record of our Lord's teachings.

The only way to make sense of Christ's teaching here (and in Chapter 6 of the Gospel of John) is to propose, as the ancient Church did and continues to do, that the sacrifice of the thrice-holy Lamb of God suffuses the temporal created order, unbound by our human sense of time as linear and discrete.

So when Christ died on the cross, he died once for all time, it's true. Nonetheless, His sacrifice of love exists in the fullness of all time, not just 2,000 years ago on a particular day. In the Holy Sacrifice of the Mass, we enter into that very moment of His Holy Sacrifice which He gave to us for all time when He instituted the Eucharist at the Last Supper.

In short, we don't sacrifice Christ again any more than He sacrificed Himself again on the cross after pouring out His blood of the new covenant at the Last Supper. We just enter into the salvific event of His sacrifice which He made for every land and every people unto ages of ages.

Related: The Poetry of Divine Love 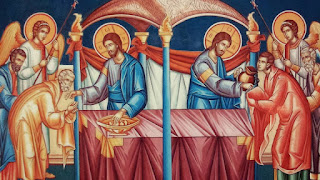 Note:  This post was partially paraphrased from a discussion I participated in on Reddit.  The above is an image of an icon of Christ literally giving Himself to His disciples in the form of bread and wine.  I purchased it from orthodoxmonasteryicons.com for my mother.
Posted by Samuel C Bunch at 7:06:00 PM