The Poetry of Divine Love

In a previous post, I addressed the question of whether or not Hebrews 9:25-28 is a refutation of the Real Presence and the Holy Sacrifice of the Mass.  One of the claims I made in that post is one that I knew would be controversial among some Protestant exegetes.  I know that because I used to be a Protestant, and even as an adult who has become Catholic, I've continued to dialogue with Protestant thinkers because they often have valuable insights and a broad knowledge of various Scripture passages.

That said, one of the biggest reasons for my choice to join the Catholic Church was that I believed it to have a much more sensible way of interpreting Scripture.  So I'm generally not in agreement with various Protestant methods for interpretation of Scripture, or hermeneutics as some call them.

I made that lack of agreement very plain when I wrote about Jesus's words at the Last Supper in Matthew, Mark, and Luke's Gospels that:


"These statements are pretty clear and are not a single isolated instance that can be read in a reductively metaphorical way."

It's fairly well known to avid readers of the Gospels that Christ sometimes referred to Himself using metaphors, figures of speech which use images that are not literally applicable to them.  When I write poetry, I often use metaphors, and I know from experience that there are multiple ways of using metaphors.

One way of using metaphors is much like the use to which we put analogies in philosophy. In philosophy, we use analogies to illustrate principles that are not so easy to illustrate if we were to examine the object itself.  For example, I might say that human reason is like the universe: ever-expanding, powerful, and worth exploring.

Or I might say that human reason is like the universe: we can only see a small portion of it from our vantage point, we don't understand all that well how it works, and we venture into it untethered at serious risk to our lives.  I have stated these as similes rather than as metaphors for the purpose of explanation, but I would employ them as metaphors in poetry.

In poetry, I have used the vivid description of a flower to illustrate the human life cycle.  Not exactly original, of course, but I use this example because it's typical of poetry.  This use of a metaphor is the use of one concept to clarify another, the use of one image to bring another into sharper focus.

Used as an analogy, a metaphor can only serve to illustrate certain parts of the abstraction on which we seek to shed light.  Other parts inevitably remain in darkness, because analogies are never perfect.  Used as clarifying imagery, a metaphor can only serve to make another image clearer; it cannot create the image by its own light.  It must shed light on something that already exists.

Such are the limitations of what I call natural metaphors.  These are the only kind of metaphors I can use given my human abilities.  My poetry, no matter how full of metaphors it might be, will never be able to illustrate every aspect of any object.  I cannot suffuse anything with light with a word, nor bring into being anything by my words.

One who uses supernatural metaphors can indeed suffuse anything with light with a word, or bring anything into being by saying the words of life.  It is God, and the only-begotten Son of God, He who is the Light, and the Light begotten of Light, the true God begotten of the true God who can do this.  Through Him all things were made, He who is the Word, one in essence with God who creates all things, one in essence with the spirit of God which hovered over the waters in the beginning when the world was created.

When God speaks, God speaks as the sustainer of the whole of creation; His words are the words of eternal life.  The Word of God can not only make whole that which has become unholy because of the stain of original sin, but can also bring into being that which is new.  The Word through whom all beings were created in the beginning is the Word through whom all beings are offered restoration to new life in the Garden.

The Word of God can make the divine life manifest to us in new ways, showering us with divine grace so that we might grow into holy plants which can be grafted as branches onto Christ, the True Vine who roots us in the divine ground of existence.

When the Word of God speaks, He doesn't stop at being a poet in the human sense.  His divine nature encompasses the material world and exists eternally beyond it, overflowing with the Love that creates. And so the Word creates as He speaks, bringing into being that which is spoken by the Logos.

When the Word of God speaks in metaphors, it is both the human and the divine poeia, an expression of the sacred act of creation.  Supernatural metaphors are a part of the divine poetry, a weaving of the divine life's graces into material reality.

Thus Christ the True Vine restores us to the Garden, grafting us as branches onto His Body, the Church, so that through Him we can be rooted once again in God, the ground of being.

Thus Christ the Good Shepherd carries us on His Body, the Church, leading us when we are healed and can walk again to lie down in the verdant pastures of Heaven, resting beside the living water in the stillness of divine love.

Thus Christ gives to the Church His precious Body and His precious Blood, the Bread from Heaven which He enjoins us to eat so that we might have life within us, the blood of Christ which we drink so that we will have life eternal.

These supernatural metaphors used by Christ are not metaphors that are poetic merely in the sense that they provide us with an image to understand the speaker's underlying logic (though that's true as far as it goes); they are also metaphors that are poetic in the sense that they create within the temporal world the fullness of God's revelation to us, a bringing of the perfectly true, perfectly beautiful, and perfectly good heavenly reality into the good but imperfect temporal reality.

This is the poetry of the one who loved us unto death, the creation of the sacraments given to the Church by Christ.  Through the gift of His Body and Blood, His death on the cross, and His Resurrection, the divine Logos who is Love Himself wove the sanctifying graces of the divine life into our material world by speaking the words of eternal life.

His words to us are the outpouring of grace upon the world, the poetry of divine love written upon our hearts by Love Himself. 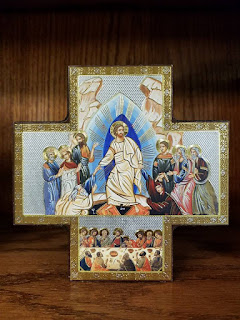 Note:  This is a Russian icon cross I purchased recently.  It's one of my favorites for theological reasons, presenting as it does the unity of the saving power of Christ in the Eucharist, on the Cross, and ultimately through the Resurrection.
Posted by Samuel C Bunch at 6:48:00 PM