By that time, I had already rejected the sort of contemporary atheism that often accompanies scientific realism along with my rejection of scientific realism, though I did take that perspective seriously as a live option.

But none of this is the foundational analytical approach for me.  None of it, not even my epistemology, provides me with a way of understanding the fullness of my own nature, my own purpose, my own meaning.  Even with a wide variety of these analytical toolkits, the best I can do is understand a small part of these things.

Generally, analysis is a matter of breaking things into pieces in order to understand them.  And that's very useful; I do it quite often.  But one thing that most analytical approaches cannot do is to help put them together, to synthesize the data into a more coherent and holistic picture of ourselves and our world.

For that, we need a keystone in the lovely and complex arch of our beliefs.  We need something that holds it all together firmly, something that can make all the pieces of the puzzle of our experiences fit together as they were meant to fit together.

This requires that we have a meta-philosophical answer to the Problem of the Criterion.  One popular answer to the problem (at least in the West) is Critical Theory.  I am not accusing it of being a very good answer, but it does seem to be an answer many have accepted.

Devout practitioners of Buddhism, Christianity, various Hindu traditions, Islam, and many other religions have quite different ways of synthesizing a holistic understanding of reality.  Though they generally make some quite different claims, traditional religions consistently have an understanding of human nature, social relations, and causal relationships that is not compatible the assumptions embedded in Critical Theory.

These devout practitioners have taken up other meta-philosophical answers to the Problem of the Criterion which are grounded in the central claims of their religion that help them synthesize an understanding of reality.  For Christians like me, the keystone is Christ crucified as understood in light of the Gospels and interpreted in light of the traditions of the Apostles and their successors.

The Christological analysis provides me with the casus belli which moves me to fight daily against my own selfishness so that I might learn to love God more fully, and thereby learn to love all of humanity and the Creation of which we are stewards more fully as well.

It is the Christological analysis which leads us to act for justice and peace on Earth so that it might reflect ever more clearly the divine Justice and divine Peace which is perfectly present in Heaven.  It is Christ's sacrifice on the Holy Cross which shows me the kenosis which is necessary for me to carry out this great commission of Love, to bring Love Himself to all people. 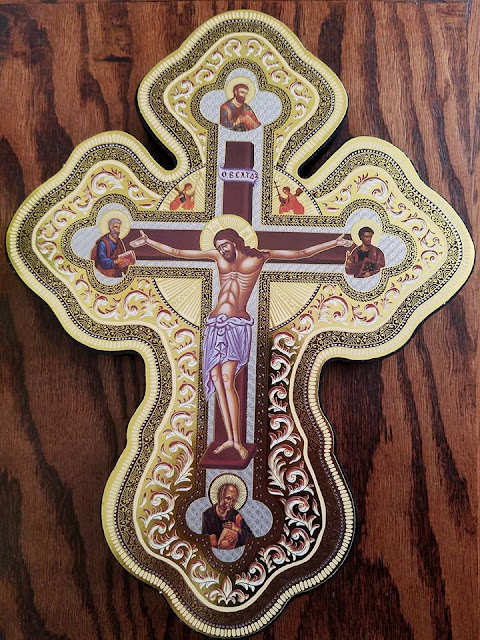 Note:  The above is a picture of an icon cross from Greece which recently came into my possession by surprise.
Posted by Samuel C Bunch at 2:31:00 PM