Fair Questions: What are the Biblical alternatives to the perpetual virginity of Mary?

Recently, a friend of mine referred me to this article at the Christian Courier.  Like many other articles on the topic, it sets out to demonstrate that the most plausible reading of the Bible (specifically the Gospels) regarding Jesus' relatives is the one that upholds the claim that Jesus had brothers and sisters who were "out of the same womb" in the sense that Mary gave birth to them.

These articles generally take the stance that the Roman Catholic Church (sometimes they remember to include the Eastern churches as well) is wrong to claim that Mary was not sexually active after the birth of Christ just as she was not prior to the birth of Christ.  Also, they reject the suggestions of the ancient churches that those persons referred to as "brothers" or "sisters" as related to Jesus were either half-brothers and half-sisters from Joseph's previous marriage or cousins of Our Lord.

The article begins with a mention of an ossuary inscribed with "James, son of Joseph, brother of Jesus.", and I will come back to that shortly.  Immediately thereafter, the article veers off into a set of assertions about Christian history that would be laughable if they weren't supported by no less a luminary than Edward Gibbon, a famous historian who happened to be anti-Catholic in his views and polemical and speculative in many of his commentaries on the historical evidence.

I could get bogged down in the historiography, but in the spirit of ecumenical dialogue with my brothers and sisters who believe in the doctrine of Sola Scriptura, I will keep the discussion centered on Sacred Scripture and what we can learn from it.

Let's consider the ossuary again, the one which was discovered to bear an inscription reading "James, son of Joseph, brother of Jesus".  In the Bible, there are two Apostles which we call in the English-speaking world by the name "James" for various reasons.  One of them is referred to as the "Brother of the Lord" by Paul in Chapter 1 of the Letter to the Galatians.

We know from the Bible exactly who the fathers of both Apostles named James were.  One had a father named Zebedee, and the other a father named Alpheus (or perhaps Cleophas), which means that the explanation that either James was "out of the same womb" as Jesus would force us to come up with an explanation as to why Jesus' mother Mary was having kids fathered by someone other than Joseph.

In the spirit of charity, let's consider what possible explanations there might be for such a situation.

Hypothetical C is probably going to be an unappealing explanation for most committed Christians, but on its face isn't any less plausible than A and B.  And the lack of Biblical evidence for this view is still a problem.

On top of that, all of these hypotheticals make it extremely difficult to explain why Jesus felt it necessary to designate the Apostle John to care for his mother Mary as a son (see John Chapter 19).  If in fact Mary had given birth to other sons (including James) or she had been remarried after Joseph's death, there would be no good reason to do that, as she would already have a son and/or husband to rely on in Jesus' absence.

So unless these hypotheticals (or something very like them) are where we want to go, and we're willing to create some even less plausible non-Biblical explanation for Jesus charging the Apostle John with acting as a son to His mother, then the claim in the Christian Courier article that we must read "adelphos" as being "out of the same womb" in all cases is a dead letter. 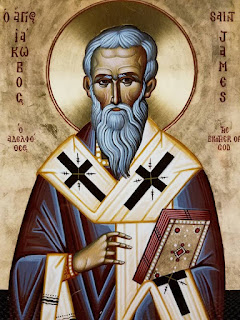 Note:  The above is an icon of the Apostle James the Just, known as the "Brother of the Lord" in the ancient churches.
Posted by Samuel C Bunch at 7:12:00 PM 1 comment: