The Other Side: The Promise and Danger of Theopoetics

Recently, Richard Rohr and Mike Morrell's book, The Divine Dance: The Trinity and Your Transformation was reviewed at The Gospel Coalition by Fred Sanders.  It was not a particularly positive review.  Sanders claimed that it was describing an alternative spirituality of flow that's committed to a metaphysical perspective that's, well, not an orthodox Christian metaphysical perspective.

John Sylvest responds to those specific criticisms made by Sanders by pointing out that the book is not a work of theology, but rather a work of theopoetic critique.  He also notes that there's good evidence that Richard Rohr has an orthodox Christian metaphysical view in mind.

Based on some of the other criticisms in the Sanders review, I suspect I know why he might make an inference from Rohr and Morrell's work that it's not coming out of an orthodox Christian metaphysical view.

For one, Rohr may well not have advertised his book as a work of theopoetic critique and made the necessary caveats about not treating it as a work of theology.  For two, Sanders is probably not disposed to be sympathetic to what even Rohr seems to admit can sound like a lightweight New Ager from California.  As Sanders notes:

"What can we say about The Divine Dance? Rohr renders himself hard to critique by constantly tossing in little imaginary conversations in which he’s being critiqued. He quotes 1 John and then says, “If I had said that independently of St. John, many would have called me a lightweight New Ager from California, but I simply share John’s deeply Trinitarian spirituality—in all its implications. This is true Traditionalism.” This does steal the thunder of the reviewer who wants to announce that Rohr’s teaching deviates sharply from the tradition, and precisely in the direction of lightweight New Age stuff from California. A kind of devotional blasphemy is his trademark. Flirtation with heresy is his frisson. He goes out of his way to sound edgy, Buddhist, sciencey, unorthodox.

There are occasional sections where I could agree with him, or at least see that he was in touch with something I wanted to learn more about. But these sections inevitably crashed into highly objectionable passages. For example, for a page or two Rohr commends hugging puppies and children, and even my contracted heart that wants to go it alone found itself strangely warming. But the next line says of these cuddly friends that “they are, for a moment—forgive me—God! Or is it the other way around? Is it you who have become ‘God’ by standing in such an unresisted flow?” He concludes: “Both are true, of course.” But both are false."


The reality is that Rohr and other Catholic authors of his generation do have a tendency to try to be edgy, toss a bit of Buddhism in to spice things up, appeal to science in some fashion that makes it clear that they don't understand science, and accomplish all the edginess by sounding unorthodox.  It often strikes me, as someone whose parents were among his generation, that Rohr and similar spiritual authors are trying way too hard to be slightly transgressive.

Despite the good intentions, it ends up not being very effective as a transgressive teaching moment, fails to be genuinely respectful of Buddhism and other Eastern religions, fails to be true to scientific inquiry, and probably does at least succeed at sounding unorthodox regardless of whether the author is or is not orthodox after all the necessary parsing is done.  I tend to give Rohr the benefit of the doubt by assuming that he's not a heretic and just wants to reach people where they are, but he doesn't always make it easy to maintain that stance.

One of the reasons I think his approach takes a serious risk, even if John Sylvest is correct that it's a theopoetic work rather than a theological work, is that theopoetics can very easily re-shape a person's theology, and without a proper grounding in the theology or even what we might call the theopoetics of the Early Church as found in the Catholic and Orthodox churches, that re-shaping of a person's theology is likely to draw them into the fields of doctrinal error.

It's all fine and dandy for someone like Rohr who's very grounded in the Catholic tradition to engage in this kind of theopoetic exercise if he knows where the boundaries are, but most people aren't so grounded in ancient Christian teachings and won't take his books as an opportunity to engage with those teachings.  In those cases, it's more likely that they will just read it, approve of it because it has that nice hint of lightweight New Age psuedo-intellectual mysticism from California with a dash of Buddhism, and go on none the better for the experience.

I have written extensively about Buddhism in a positive way without making the syncretic maneuvers so typical of those psuedo-intellectual lightweights from California.  I respect Buddhism enough in its own traditions to avoid co-opting it to make my Christianity more palatable to my contemporaries.  And I don't use Eastern religions to spice things up; I seriously considered converting to Buddhism when I was younger, so it isn't mere flirtation or knowing allusion without really knowing Buddhist traditions.

Theopoetics can and should be orthodox.  It's very possible to do theopetic work without falling into these traps.  I make that claim not as a distant critic of theopoetics, but because I'm engaged in it myself and know perfectly well that theopoetics can be orthodox.  I write religious poetry, poetic prayers, and theopoetic meditations that are also theological.

I sincerely hope that we can take a page out of the book of St. Isaac the Syrian and many others in the Christian tradition who managed to ground and express that tradition in their lived experience and do so poetically in ways that elucidate the divine mystery...without the sincerely manufactured edginess. 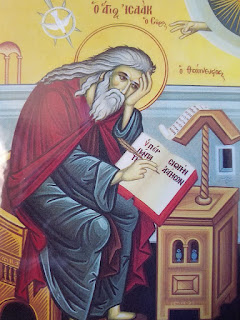 Note:  The above is a picture I took of an icon of St. Isaac the Syrian purchased from orthodoxmonasteryicons.com because I think he's a Saint worth reading and emulating in many ways, but especially because his love for God wasn't merely a cold and rational one, but also a deeply passionate and poetic one.
Posted by Samuel C Bunch at 8:14:00 PM