Love it to Death: The Forgiveness of Love

I find it easy to forgive people when they haven't really done anything to harm me.  Or at least when I can divest myself of my ego long enough to recognize that it only felt like harm because I was being irrationally selfish in my attachments to things that are ultimately trivial.

What's more difficult to forgive is the kind of actions that are objectively harmful even when the ego is set aside.  How do we forgive someone who assaulted us?  Someone who killed a close relative?  What about someone who sexually molested a child who was in our care, whether a child in our own family or a friend's family?

I find that I can eventually forgive when I pray for those who have done grave wrong, when I gradually come to genuinely wish them well and hope for their full restoral.  Though it is extremely difficult with those who have sinned grievously, when I will their healing (heart, body, mind, will, and soul entire), I can begin to let go of my vision of them as being merely the immoral vehicle of the sinful act which they committed.

When we reduce a person to their worst sins, we deny their humanity, we deny their virtues, and we ultimately deny that they are an imago dei, made in the image and likeness of God.  To forgive, we must begin to look at those who have committed the worst sins in the same way that Christ, the Son of God, looks at us.

Christ does not look at the filth on our souls and regard us as nothing but the filth.  He looks upon us as a whole being, our past and present and future visible simultaneously in His gaze that sees things in the fullness of time.  He looks upon our creation in the image and likeness of God, the good deeds we do in secret, and the deep internal wounds that drive us mad so that wallowing in the filth seems like a good idea.  And yes, He sees the filth too, more of the filth than anyone else can see.

And yet, He forgives.  Christ forgives even those who directly commit an objectively evil act against Him, those who murdered Him when they scourged Him, forced Him to carry the cross to Golgotha, and then nailed Him to it by His hands and feet.  His response to their brutal tortures leading up to his last breath was to say, "Father forgive them, for they know not what they do."

We would rather not love from afar.  We want forgiveness to be the beginning of a bridge between us and the ones who have wronged us.  And yet we must respect their choice if they are never willing to help us span the distance.  In the same way, Christ respects our choice when we are unwilling to cross the bridge He builds to reach us with His forgiveness as He bore our sins on the cross, a forgiveness offered to us in the spirit of Love.

He loved us unto death, bearing our sins so that we could experience the forgiveness of Love and have the opportunity to cross the bridge to the divine life love which was formed of the Holy Cross, the bridge to adoption as sons and daughters of God our Father.  So too we must love to death our slavery to sin by bearing with the sins of others, forgiving them in the spirit of love.

Just as Christ forgives us over and over for the wrongs we commit, still seeking the full communion of love with us, we are called to forgive those who have sinned gravely against us, to forgive as many times as we are wronged.  Just as the forgiveness of Love is endless, so too our forgiveness must be endless if we would participate in the divine life of Love.

We who are icons of Love were created to manifest the divine life, reciprocating the divine love poured out on us in the form God's grace by making our lives a sacrifice of praise, by reflecting His divine love into all the world.  Following Christ's example as He walked with us on the earth, we make Love's forgiveness of our sins known when we freely forgive all those who have sinned against us as we walk through life.

O, how can we Christians ever forget to forgive?  The entirety of the Incarnation, the fullness of the eternal Word brought into the temporal world, was a message of forgiveness from the Father.  Through the sending of His son, the Father said to us, "Your sins are forgiven.  Rise up, and walk humbly with your God." 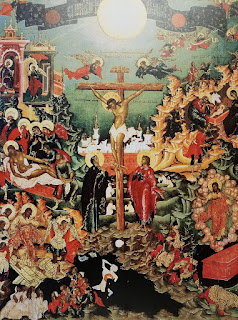 Note:  The above is a picture I took of a replica of a Russian icon of the Crucifixion with other scenes from the life of Christ, which I purchased from legacyicons.com recently.
Posted by Samuel C Bunch at 5:42:00 PM