The Fermentation and Distillation of Christianity

I was speaking with a friend today about one of the major differences between the ancient Church and the Protestant and/or Post-Reformation churches.  As a former Protestant speaking to a cradle Catholic, I was attempting to explain why Protestant understandings of soteriology are, while being partially correct, usually so simplistic.  I suspect that it's because Protestant theological methodology is fundamentally different from earlier approaches.

Protestants, and those churches which broke away from them after the Reformation was initiated, start from the working assumption that the Catholic Church added a bunch of extra stuff to the teachings of Christ, the Apostles, and the Early Church (Early Church being defined differently by many of them depending on exactly when they think this corruption of doctrine happened).

In addition, they propose that this was a bad thing, that all of the Catholic doctrines, devotional practices, art forms, ecclesiastical structures, and canons (rules) that came about after [insert the specific preferred time here] were both unnecessary and dangerous accretions.

These claims have important consequences for how Protestants and their heirs approach theology.  After all, if it's true that there is a large body of accretions in the areas of doctrines which are arrived at by theological reasoning, the task for an earnest Christian in search of the truth is to try to toss out the accretions and uncover the pure Christian teaching underneath all the extra stuff.

To explain how this results in oversimplified soteriology, for example, I used an analogy of a flower.  Let's suppose that we believe (rightly or wrongly) that some parts of this flower don't belong to it, that they were pasted on rather than growing organically out of its natural root.  Understandably, we would want to remove things that look like they're pasted on.

But the trouble is that we can't agree on exactly which sepals and petals are pasted on; all we can agree on amongst ourselves is that the stem is definitely part of the original flower.  So we just keep the stem, and this leaves us with a simple structure, but it's probably missing some sepals and petals that had grown organically out of the stem because we couldn't agree as to which ones those were.

This process of stripping away what is believed to be pasted on is the necessary result of the working assumptions of Protestant thought.  The flower will get stripped down in some fashion, and because there is no one authority who decides what gets removed based on some coherent standard, the result is likely to be quite ugly and destructive to the flower.

My friend proposed what might be a more sympathetic analogy, that the Protestant approach is like a process of distillation.  Their approach is to try to separate out the various components of ancient Christianity to derive from it the pure substances.  I agree that this is a good analogy, and I think we can take it further.

Protestant theology and its offshoots are like various whiskeys, distilled so much that they are very strong drinks made of simple substances.  And like all strong drinks, these distilled Christian teachings are best appreciated in moderation and imbibed only occasionally.  The problem with them isn't that they're impure, but that they are in their purity missing many of the ingredients that serve the valuable purpose of keeping the less extreme beverages well-balanced.

The fermentation process that produced the ancient Church (present in the Catholic communion, the Eastern Orthodox intercommunion, and the Oriental Orthodox jurisdictions) is understood by Protestants and their heirs to have become a faulty one beginning at a certain time in Christian history.  Perhaps, by analogy, they think that too many sugars were added in the process at too many different times.  And so the distillation of Christianity began in earnest (and continues today, 500 years later).

In this distillation, Christian art became increasingly minimalistic, pious devotions were abandoned, ecclesiastical structures were pared down, and rules were tossed out (and then recreated later in some cases).  Christianity might have been able to survive these changes, if this were all the distillation process accomplished, if it had only gotten rid of traditions that could be rebuilt if needed.

But, inevitably, that wasn't the end of it; the distillation process couldn't help but affect the whole of Christianity.  The purification into separate elements didn't stop at doctrine and theology.  Most importantly, the intricate tapestry of Christian theology had many threads yanked out of it.  The distillation of Christian teaching resulted in a purity of being in tatters, unable to hold together. 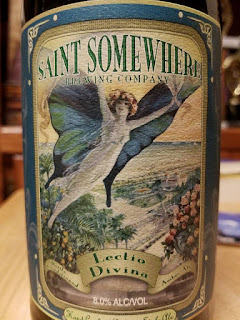 Note: This is a picture I took of a sour ale I was drinking.  The artwork on the label was excellent.
Posted by Samuel C Bunch at 7:20:00 PM