The Other Side: The Deaconess Dilemma

I wrote recently about the kerfuffle over Pope Francis' willingness to study the question of deaconesses.  And it is indeed an open question as to whether or not the Church will restore the tradition of deaconesses.  The question of whether or not the Church can ordain women to the priesthood has been settled for a long time, and was reiterated in recent history by Pope John Paul II in Ordinatio Sacerdotalis.

In First Things, Charlotte Allen suggests that the ordination of women is exactly what proponents of restoring the tradition of deaconesses want, and that they see deaconesses as a step along that path.  There were comments on her article suggesting that she had unfairly characterized proponents of bringing back deaconesses as being motivated by politics or power.  And that has some weight to it as a criticism.  It's very unlikely that every single person in favor of a return to that early Church discipline is motivated by power or politics.

But a lot of them are indeed motivated exactly by politics and power.  If that weren't the case, they wouldn't be making feminist critiques of the sort used to identify discrimination against women by governments and pave the way to empower women by making sure they have access to roles traditionally held by men.  For example, the WomenPriests website, and this petition at Groundswell argue that equality for women implies that priestly ordination should be open to women as well as ordination as deaconesses.

It's a fairly simple analysis at bottom:


There are of course other arguments from Christian tradition that aren't completely dependent on the common academic feminist modes of analysis that are rooted in anti-Christian ideologies.  Saint Thekla, Protomartyr and Equal to the Apostles is an example of a woman who might make us think that women should have the same authority as men in the Church.  After all, if she is truly Equal to the Apostles, doesn't it follow logically that she has the same roles and authority?

It only follows logically if we are using the above power analysis, a political analysis in which it is assumed that different roles and authority are an instance of inequality.  This definition of inequality is not the only one.  The commonly accepted definition of equality is that two people have the same value when they are equal, not that they have the exact same roles and authority.  I will never have the role of a midwife or the authority of a Queen, but this does not logically imply that I have less value as a person than a midwife or a Queen.

As someone who used to think ordaining women to the priesthood in the Catholic Church was perfectly acceptable and also inevitable, I'm pretty familiar with the arguments for it.  And I sympathize with those who make the arguments for it only to be dismissed out of hand.  It's a question worth wrestling with, and it's unfortunate that many would rather just toss it aside as not worth any consideration because it came to the fore as second-wave feminism was cresting, being obviously influenced by the social and political critiques of second-wave feminism.

Though I eventually changed my mind and no longer think it would be consonant with Christian tradition to ordain women as priests or deacons (you can read about my thought process here), it is precisely because I want to use the same approach of looking at Christian tradition that I have no objections to restoring deaconesses to the life of the Church.  If the Church in Her wisdom decides that the ministry and disciplines of celibate women performing acts of service in the community and the liturgy are needed once again outside of convents and monasteries, I will gladly assent to that decision.

Unfortunately, I suspect that if the Church did decide to do this, many would point to the other side of the debate over women's ordination and say, "Look how very wrong they are!"  The folks who are reflexively opposed to the ordination of women would be understandably worried that the Church was allowing political concerns to transcend Christian concerns.  And the folks who are in favor of the ordination of women would be understandably disappointed when the Church failed to ordain any women as priests shortly after restoring the discipline of deaconesses, leaving women without equal access to power. 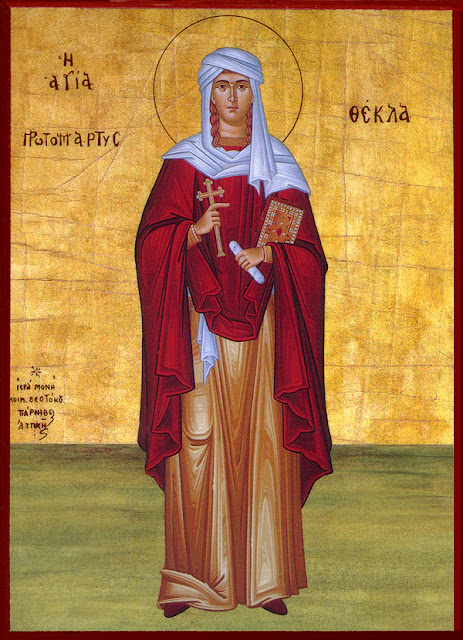 Note:  The above is an icon of Saint Thekla, Equal to the Apostles.
Posted by Samuel C Bunch at 6:45:00 PM