The Unfettered Mind: The Strength of Faith

These past few weeks, I re-read The Unfettered Mind written by Takuan Sōhō.   As I've mentioned before, I originally read it because of my interest in both martial arts and Zen Buddhism, and I find that my understanding of it now is deeper than it was when I was in my early twenties when I first read it.

After studying Theravada Buddhism more deeply over the past 5 years, I now find myself better able to understand what Takuan Sōhō was trying to convey to the master swordsman to whom he was writing.

The third part of The Unfettered Mind is entitled "Taiaki" in Japanese, and it refers to a sword named Taia.  This part of the book is in a different format than the others.  In it, Takuan Zenji provides brief thoughts in Chinese followed by explanations of those thoughts in Japanese.  I'll be centering the Chinese starting texts and marking them in bold to indicate what they are.

"Taiaki" begins in a way that will help us understand the later passages more fully, establishing a pattern of insight.

Presumably, as a martial artist, I do not fight for gain or loss, am not concerned with strength or weakness, and neither advance a step nor retreat a step.  The enemy does not see me.  I do not see the enemy.  Penetrating to a place where heaven and earth have not yet divided, where Ying and Yang have not yet arrived, I quickly and necessarily gain effect.


Presumably indicates something I do not know for sure.
Originally, this character was read with the meaning "lid."  For example, when a lid is put on a tier of boxes, although we do not know for sure what has been put inside, if we use our imaginations we will hit the mark six or seven times out of ten.  Here also I do not know for sure, but figure tentatively that it must be so.  Actually, this is a written form we use even about things we do not know for sure.  We do this to humble ourselves and so as not to seem to be speaking in a knowing manner.
Martial artist is as the characters indicate.
Not to fight for gain or loss, not to be concerned with strength or weakness means not vying for victory or worrying about defeat, and not being concerned with the functions of strength or weakness.
Neither advance a step nor retreat a step means taking neither one step forward nor one step to the rear.  Victory is gained without stirring from where you are.

He points out that when we stop striving to win, it enables us to win without striving.  I've written before about wu wei, the process of acting efficaciously without action, which is the result of effortless being.  And his description of fighting without striving very much captures the essence of those moments of my martial arts training during which I slipped into a state of wu wei, a state of mind empty of all selfishness that is all too rare an experience for me.

The me of "the enemy does not see me" refers to my True Self.  It does not mean my perceived self.
People can easily see the perceived self; it is rare for them to discern the True Self.  Thus I say, "The enemy does not see me."
I do not see the enemy.  Because I do not take the personal view of the perceived self, I do not see the martial art of the enemy's perceived self.  Although I say, "I do not see the enemy," this does not mean I do not see the enemy right before my very eyes.  To be able to see one without seeing the other is a singular thing.
Well then, the True Self is the self that existed before the division of heaven and earth and before one's father and mother were born.  This self is the self within me, the birds and the beasts, the grasses and the trees and all phenomena.  It is exactly what is called the Buddha-nature.
This self has no shape or form, has no birth, and has no death.  It is not a self that can be seen with the aid of your present physical eye.  Only the man who has received enlightenment is able to see this.  The man who does see this is said to have seen into his own nature and become a Buddha.


Whether during combat or in the daily struggles of life, we do not see the true self of our opponent, not even at the moment of death when he might reveal his most profound nobility, deepest rage, or rank cowardice.  These things are no more the whole story of the essence of anyone's consciousness than our moments of cowardice, or rage, or nobility are the true Self we know to be within us.

Though each of those moments when we choose nobility, rage, or cowardice may shape the True Self, it nonetheless transcends such moments in an important way.  And the more we awaken to what is called in the Mahayana tradition the Buddha-nature, the more we discover that the True Self is what remains when we have been stripped of our selfishness.  Revealed in the fullest glory of its liberation from all craving, the True Self is truly selfless.

We are most true to ourselves when we are consistently selfless, recognizing that we are not separate from our opponent, that our existence is not an instance of duality but rather of unity.

Long ago, the World Honored One went into the Snowy Mountains, and after passing six years in suffering, became enlightened.  This was the enlightenment of the True Self.  The ordinary man has no strength of faith, and does not know the persistence of even three or five years.  But those who study the Way are absolutely diligent for ten to twenty years, twenty-four hours a day.  They muster up great strength of faith, speak with those who have wisdom, and disregard adversity and suffering.  Like a parent who has lost a child, they do not retreat a scintilla from their established resolution.  They think deeply, adding inquiry to inquiry.  In the end, they arrive at the place where even Buddhist doctrine and the Buddhist Law melt away, and are naturally able to see "This."
Penetrating to a place where heaven and earth have not yet divided, where Ying and Yang have not yet arrived, I quickly and necessarily gain effect means to set one's eye on the place that existed before heaven became heaven and earth became earth, before Ying and Yang came into being.  It is to use neither thought nor reasoning and to look straight ahead.  In this way, the time of gaining great effect will surely arrive.


Takuan Zenji tells us that six years of suffering preceded enlightenment.  The path to accomplishing the selflessness which flows from divesting ourselves of all craving is an extremely difficult one.  Suffering, if we embrace it consistently and let it strip us of our attachments to our transient selfish desires, gradually reveals the True Self.

But this takes so long to accomplish that we might wonder: who would spend years practicing meditation diligently and embracing suffering willingly?  What would motivate someone to do something so extraordinary?  It would require an extraordinary motivation, something to push us beyond the painful limits of normal achievement.

The Zen Master calls this the strength of faith, the strength that keeps us working peacefully towards selflessness for hours, weeks, years, or even decades.  Faith is generally not something that is associated with Buddhism in the mind of the average Westerner, but in the Pāli Canon, the Buddha specifically directs us to have faith in the Buddha, the Dhamma he taught, and the Sangha which has preserved it.

The Buddha recognized that faith and inquiry, even deep inquiry into the nature of inquiry itself, are not opposed.  And Takuan Zenji points out to us that it is the strength of our faith which motivates us to dive into the ocean of inquiry and swim to the other shore, seeking to learn wisdom from others along the way.

It is the strength of faith that allows us to keep swimming straight ahead, to continue the journey even while many others turn back in despair at the suffering it entails, or give up because of the humility required to consult the wisdom of those who have been long in the ocean of inquiry.

The Immovable Wisdom - The Selfless Death - The Strength of Faith 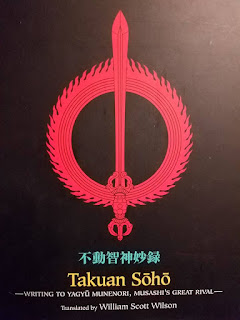 Note:  The above is an image of the book cover of the translation of The Unfettered Mind that I used for this post.
Posted by Samuel C Bunch at 7:26:00 PM