When reading an article about atheist mega-churches, many religious folks might be inclined to say, "Aha, I knew atheism was a religion all along and now there's proof!"  Others who had previously rejected the idea that atheism is a religion might be inclined to give the notion a bit more consideration.  My analysis of the question remains the same, but we will get to that later.

To figure out whether atheism can properly be called a religion, we can simply answer the question, "Is theism a religion?"  This is a great way to analyze the question for those who are theists because it allows them to minimize any confirmation bias in the analysis.  And because theism and atheism operate on the same plane of belief and answer the same question, there are enough parallels to make them analogous for the purpose of answering this question.

Does theism provide those things?  Quite obviously not.  It provides one belief about what sorts of things are real, specifically that a deity exists and interacts with the world and those of us in it.  We would not call theism a religion because it doesn't even fulfill the most basic functions of a religion. Theism is not a religion, though we could rightly say that most theists have a religion. Similarly, atheism does not even fulfill one of the basic functions of a religion.  And just as in the case of theists, we can rightly say that many atheists have a religion, but not that atheism is a religion.

Let's further consider some examples of views which are atheistic.  Deists reject theism, and thus are atheists in the strict sense.  Some forms of animism exclude theism, and would thus be atheistic.  Setting aside the question of whether it is coherent in every case for an atheist to be a Buddhist, there are also atheistic practitioners of Buddhism.

Not addressing some obvious concerns about consistency, there are even atheists in the West who believe strongly in Christian ideals such a love and caring for the poor while rejecting many of the claims of traditional Christianity in favor of their contemporary philosophical assumptions.  Arguably, many of those folks have a religion whose core values are derived from Christianity and whose worldview is provided by scientific realism, their moral outlook being generated via a crude combination of their values and their political ideals such as egalitarianism and democracy.

To return to the original question, I don't think that we can claim correctly that atheism is becoming a religion, but we might be justified in claiming that atheists are increasingly engaging in explicitly religious behavior.  I suspect that we are currently witnessing the development of a new religion which takes scientific realism for its ontology/origins narrative/eschatological narrative and derives its moral values from the philosophy of Sam Harris or a similar secular philosopher.  I don't know what this developing religion will be called, but it will certainly be interesting to watch it grow. 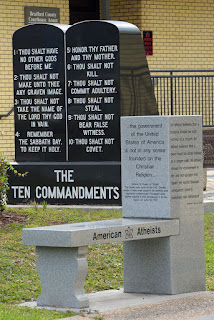