Dark Night of the Soul: Death to the Ego

The portion of my early childhood that was spent in front of the television was filled with messages about how convenient things are supposed to be for me, by suggestions that all these products were made just for me.  My teenage years were chock full of those same messages, and as my family moved into a middle class financial status, it became easier to fulfill those messages.  While I and my siblings consistently had more modest and inexpensive clothes, toys, and games than our peers due to the wise frugality of our parents, we nonetheless did have plenty of them.  I stayed away from various illegal drugs, but I was heavily dependent on temporal pleasures.  I would escape into fantasy, science fiction, and contemporary fiction with disturbing regularity.  I was reading a 300 page book almost every night as one point.  Video games were similar, but they were the same pleasure fix to keep my smoldering rage at the world at bay, a rage that grew because popular culture kept feeding me the lie that I deserved every good thing and that everything should be convenient for me.  That rage grew because my life experience completely contradicted the presumption that such a life of ease was even possible.

"With respect also to spiritual sloth, beginners are apt to be irked by the things that are most spiritual, from which they flee because these things are incompatible with sensual pleasure.  For, as they are so much accustomed to sweetness in spiritual things, they are wearied by things in which they find no sweetness.  If once they failed to find in prayer the satisfaction which their taste required (and after all it is well that God should take it from them to prove them), they would prefer not to return to it; sometimes they leave it; at other times they continue it unwillingly.  And thus because of this sloth they abandon the way of perfection (which is the way of the negation of their will and pleasure for God's sake) for the pleasure and sweetness of their own will, which they aim in satisfying in this way rather than the will of God."


This expectation of pleasure and a habit of indulging in pleasurable pursuits meant that I was a beginner as described by St. John of the Cross for many years.  I was a functional atheist for much of my teenage years, relying on the pleasures modern comforts afforded me, stagnating in that deadly miasma of convenience grown out of the brilliance and hard work of others.  I prayed very little and could often not bring myself to pray for very long when I did so.  I lived for the most part as if there was no God; my devotion was to escaping the reality which I found so harsh.  Little did I know then how incredibly good my circumstances were and how little reason I had to want to escape it.  But at the time, my only concern was that my will be done.

"These persons likewise find it irksome when they are commanded to do that wherein they take no pleasure. Because they aim at spiritual sweetness and consolation, they are too weak to have the fortitude and bear the trials of perfection. They resemble those who are softly nurtured and who run fretfully away from everything that is hard, and take offence at the Cross, wherein consists the delights of the spirit. The more spiritual a thing is, the more irksome they find it, for, as they seek to go about spiritual matters with complete freedom and according to the inclination of their will, it causes them great sorrow and repugnance to enter upon the narrow way, which, says Christ, is the way of life."


I am currently known among my friends for being a workaholic; they are concerned that I try to do much and stretch myself too thin.  Fifteen years ago, I barely did anything of any note.  I was not a poet.  I was not a philosopher.  I was not a skilled writer.  I was a mediocre martial artist then, whereas now I have designed my own training program.  I avoided hard manual labor rather than enjoying it.  I did as little of anything that resembled work as possible during that time.  I did not have the drive and discipline to embrace life's challenges; I just wanted my escapes and it never crossed my mind to ask what He wanted.  I not only did not take up my cross and follow Him, I did not even consider picking it up much of the time.

"And many of these would have God will that which they themselves will, and are fretful at having to will that which He wills, and find it repugnant to accommodate their will to that of God. Hence it happens to them that oftentimes they think that that wherein they find not their own will and pleasure is not the will of God; and that, on the other hand, when they themselves find satisfaction, God is satisfied. Thus they measure God by themselves and not themselves by God..."


My ego had me wrapped up in the warm blanket of pleasant lies for so long that when I finally did start growing in my relationship with God, that growth was stunted by my inability to recognize that what God wanted for me was far from what I wanted for myself.  I genuinely thought that God would want what I wanted because I was clearly so smart and so right.  I could not imagine that we might disagree as to what is best for me.  I was indeed measuring God by my self rather than measuring my self by God, which is probably how I managed to frequently measure up in my own estimation.

This did not change very often until many years later when I learned enough about human cognition that I recognized that virtue was only possible after a commitment to the death of the ego, a lived pledge to attain freedom from all the little addictions that keep us from true freedom.


The Fall of Pride - Death to the Ego - Bread from Heaven 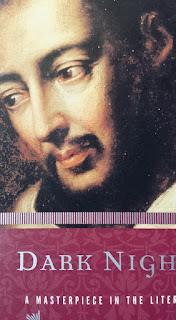 Note:  The above is a picture of part of the cover of the translation of St. John of the Cross's work I'm using.  For more information about it, you can see my Sources page.
Posted by Samuel C Bunch at 8:52:00 PM