Fair Questions: Was the Buddha a socialist?

The fascination with Buddhism on the part of Westerners who have an intellectual inclination tends to lead to some of us imposing our Western philosophical and moral frameworks onto Buddhism.  This trend is not limited to philosophical and personal or social moral issues, but also extends into the political and ideological concerns to which every matter seems to be reduced in contemporary public discourse.  I recently came across a social media discussion between a friend and his interlocutor in which it was alleged that the Buddha was a communist or more generally a socialist.

As before, I will turn to the discourses of the Buddha as preserved and recorded by his disciples to determine the plausibility of the Buddha's political views being in the category of socialism, in which the means of production are collectively owned and wealth distributed as equally as possible.

While the Buddha did not seem overly interested in economics or the means of production, he did speak (through allegory) to the issues of justice and happiness in this life which might impinge upon how we make economic decisions as societies.  The following is advice given to a new king about how to rule his kingdom in accordance with the Dharma:

"Let no crime prevail in your kingdom, and to those who are in need, give wealth.  And whatever ascetics and brahmins in your kingdom have renounced the life of sensual infatuation and are devoted to forbearance and gentleness, each one taming himself, each one calming himself, and each one striving for the end of craving, from time to time you should approach them and ask: 'What, venerable sirs, is wholesome and what is unwholesome, what is blameworthy and what is blameless, what is to be followed and what is not to be followed?  What action will in the long run lead to harm and sorrow, and what to welfare and happiness?'  Having listened to them, you should avoid what is unwholesome and do what is wholesome.  That, my son, is the duty of the wheel-turning monarch."


There are two moral duties for the ruler according to the Buddha related to the happiness of those in their care.  First, the king must protect them from harm using the resources he has available.  Second, the king must provide for those in material need.  In addition, he has a duty to consult with those who are living in deep poverty and seeking the highest moral improvement with regard to how he should behave rather than trusting his own understanding of goodness.

This is not the only allegory of a kingdom which the Buddha used to illustrate how we should make our personal moral decisions.  Elsewhere in the Pali canon, he relates the following story about a king who wants to make a great sacrifice that is beneficial to his own happiness.

"The chaplain replied, 'Your Majesty's country is beset by thieves.  It is ravaged; villages and towns are being destroyed; the countryside is infested with brigands.  If Your Majesty were to tax this region, that would be the wrong thing to do.  Suppose Your Majesty were to think: "I will get rid of this plague of robbers by executions and imprisonment, or by confiscation, threats, and banishment," the plague would not properly be ended.  Those who survived would later harm Your Majesty's realm.  However, with this plan you can completely eliminate the plague.  To those in the kingdom who are engaged in cultivating crops and raising cattle, let Your Majesty distribute grain and fodder; to those in trade, give capital; to those in government service assign proper living wages.  Then those people, being intent on their own occupations, will not harm the kingdom.  Your Majesty's revenues will be great; the land will be tranquil and not beset by thieves; and the people, with joy in their hearts, playing with their children, will dwell in open houses."


The lesson here is that our own happiness is assured by giving to others and serving them well, but can we take these allegories and straightforwardly apply them to contemporary political economy?  I would be reluctant to do so because of my suspicion of interpreting ancient texts in light of modern ideas, but if we were to try to find an analog of the wheel-turning monarch in the modern state, what would that look like?

It wouldn't be socialism, because the king remains the king and still has concentrated wealth and ownership of the means of production is far from collective; the wheel-turning monarch has no moral imperative to eliminate income inequality.  And despite the simplistic claims of those who believe that Buddhism requires us to all join the Sangha and live in communal poverty, the Buddha himself taught elsewhere in the Pali canon that householders could also follow in his footsteps, which means that their vision of a primitive communist utopia is not normative for the Buddhist.

Based on the very scant coverage of political economy in the Buddha's discourses, it appears that he favored in his allegories what we might think of today as a Keynesian approach to improving the economic conditions of the society, specifically in the sense that the ruler(s) should invest in their people and resources as a means of achieving a stable society in keeping with the Dharma. 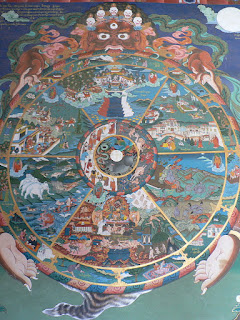