The Benefit of Doubt: The Limits of Science

Several weeks ago, I explained two differing positions among scientists and philosophers of science about what science is, and like most discussions about what science is, the answer came down to the answer to the demarcation problem.  How do we tell the difference between scientific and non-scientific thought?  Or in other terms, what are the limits of science, the boundaries at which science ends and something else begins?

As a disclaimer, I am not one of those people who seeks to undermine science; I am not a Young Earth Creationist, nor do I deny anthropogenic influences on climate change and the urgency of changing human behavior with regard to our planet.  To the contrary, I seek to preserve that which is best about science; I am strongly opposed to the movement to revise scientific theories to suit the members of a religious group or subject science to mere political concerns.  I am also strongly opposed to the current project to turn science into a religion, not because I am concerned that it might damage religion, but because it will most definitely cause grave injury to science.

Like many philosophers of science, I value a clear understanding of what makes science distinct from other methodologies and how science relates to them.  In order to under the limits of a methodology of belief system, we need to examine the assumptions underlying the methodology.  The assumptions of any methodology or belief system (science being both) allow us to derive its limitations from studying those assumptions.  If, for example, I want to understand what the limits of arithmetic are in Base 10, then I merely need to examine the assumptions (or axioms) underlying the operations in order to work out what it can and cannot do.

So given these useful assumptions, what can we now work out about the limits of science?

2.  The world may or may not operate on general principles exclusively.  But because anomalies and data points far off the beaten track are treated as irrelevant to scientific theory formation in terms of the articulation of the theory, there is no way for science as a body of propositions to incorporate anything other than general principles into itself.  Unlike the 1st point, this has practical implications for science; anything which does not operate by general principles, which is truly exceptional, cannot be incorporated into the body of scientific knowledge.  And science has no way of knowing how many such truly exceptional events there are.

3.  I happen to agree that the principles on which the world operates can be expressed mathematically; I could always be wrong.  It could well be that the forms of mathematics which our tiny hominid brains have been using are not sufficient to complete the task of expressing those general principles.  And how would we ever identify that such is the case?  If it was the case, then wouldn't we simply assume that our failures to be able to express the general principles upon which the world operates are due to a lack of evidence, or a problem with our testing procedures, that we merely need to keep trying harder?

4.  Science could not function effectively as a methodology for studying natural phenomena if all scientists went around assuming that everything (or at least the more difficult to understand things) were the result of supernatural principles or some sort of divine exception to the natural order.  Scientists need to assume, while doing the work of science, that the principles on which the world operates are exclusively natural.  So what if it is the case that there are supernatural principles at work, and they impinge upon the natural order?  Science would never notice supernatural principles; if they exist, then scientists would simply assume that they do not and continue searching for a merely natural explanation for the evidence or ignore it as an outlier among their data points.

5.  I very much agree that the observation of our senses can be supplemented by instruments we construct; as always, I could be wrong about that, whether in general or in specific cases.  A telescope might or might not be providing me with something that supplements my senses.  And there's no way to know for sure, given that all I have to base my conclusions on are the information provided by my senses.  Which doesn't seem like a serious issue until we consider the next point...

6.  Why do we think that our instruments are more reliable than our own senses?  Well, there's a great deal of scientific evidence suggesting that our senses are far from perfectly reliable, and that we only perceive a small portion of what there is to perceive in many areas.  Granted, the evidence rests on assumption #1 and may not be true, but if it is, then we cannot fully trust our sensory inputs to provide us with accurate information.  It is entirely understandable to trust simpler mechanisms not prone to the same kinds of errors as our complex perceptual mechanisms which have many more points of failure.  But because we have to rely on our senses to determine that they are more reliable, and we are strongly subject to confirmation bias, it's entirely possible that we are prejudiced in our conclusions on that point and we could well be wrong.

7.  It might or might not be true that the general principles which we use to understand local phenomena in the universe apply in all parts of the universe, but this can at least be tested in principle as we explore more of the universe.  What is not testable in principle is the application of general principles we discover now to the events of the distant past.  Unless we develop a time machine which can take us into the past (and we can be sure isn't contaminating the evidence), there is no way to verify that our logical inferences about the distant past hold true.

In understanding these limits of science, we can better perform scientific inquiry because we are less likely to leap to conclusions about the results of any study or experiment and less likely to overstate the implications of the results beyond what the evidence actually supports.  In understanding the limits of science, we keep the doubt in science.  A benefit of doubt is that it keeps our minds open to new information, something which is critical for successful scientific inquiry. 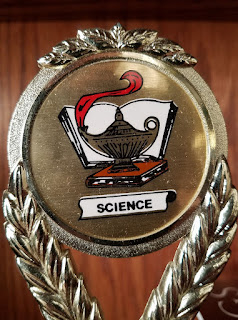 Note: The above is a picture of the top of one of my science fair trophies.
Posted by Samuel C Bunch at 9:13:00 AM