You can listen to the embedded podcast version of the 3-part series or read the written version below.

I like to win.  I like to be excellent at whatever tasks I set out to learn and accomplish.  In short, I seek victory.

When I was younger, I didn't understand victory.  This was a problem that became apparent to me as I was training in martial arts.  As someone who watched action films, cartoons, and other television shows featuring characters who were victorious martial artists, I had seen victory accomplished many times.

Some victories were won through the superior speed of a character's punches and kicks.  Others were won through superior strength behind the wielding of a weapon, or superior aim with a ranged weapon, or superior agility, or clever subterfuge.  What I was learning is that victory is a matter of the most effective destruction of one's opponent, a matter of winning the fight by virtue of superior technique, speed, strength, agility, or intelligence.

So when my instructor told me that true victory for a martial artist is avoiding a fight, preventing a fight from happening, or talking one's way out of a fight...well, I was being confronted with an entirely different way of understanding victory.  I was learning that combat, which I was expending a great deal of time and effort to learn, was not a sign of victory.  Instead, it was a sign that I had handled the situation so poorly that I had been forced to fight or a sign that I had controlled myself so poorly that I wanted to fight.

And as Lorenzo Scupoli points out in The Spiritual Combat, we would be wrong.

The second is a persistent application to the serious and diligent examination of every object in order to distinguish the good from the evil. A judgment is formed which is not in accord with external appearances, the testimony of our senses, or the standards of a corrupt world, but which is conformable to the judgment of the Holy Spirit.

Then we shall clearly see that what the world pursues with such eagerness and affection is mere vanity and illusion; that ambition and pleasure are dreams which, once shattered, are succeeded by sorrow and regret; that ignominy is a subject of glory, and sufferings a source of joy; that nothing can be more noble or approach the Divine nature more closely than to forgive those who injure us, and to return good for evil.

We shall see clearly that it is greater to despise the world than to have it at one's command; that it is infinitely preferable to submit to the humblest of men for God's sake, than to command kings and princes; that an humble knowledge of ourselves surpasses the deepest sciences; in short, that greater praise is due to him who curbs his passion on the most trivial occasions, than to him who conquers the strongest cities, defeats entire armies, or even works miracles and raises the dead to life.

The true victory of the spiritual combat is to humble ourselves, to let go of our selfish desires in order that our hands might be free to humbly accept God's gift of divine love, and to in turn give the gift of divine love to all who are made in His image and likeness.

Learning How to Fall - Learning Our Weaknesses - Learning of True Victory 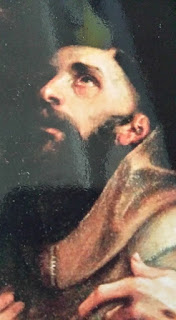 Note: This is the cover photo on my copy of The Spiritual Combat.
Posted by Samuel C Bunch at 7:36:00 PM