Recently, a friend of mine suggested on Facebook that what we might call "contextual theology" projects such as Feminist theology, Queer theology, Black Liberation theology, or Latino theology is just a waste of time, and that we need to ask how it can be coherent with the whole Christian tradition.  I think that is indeed a necessary question to ask, but I'm not so sure that contextual theology is a waste of time.

For one, I think it's a good idea to be up front about one's biases when doing any kind of intellectual work, whether it's theological or philosophical or scientific or other work.  To their credit, theologians who self-identify with these contextual theology movements are being very forthright about their biases in a way that many other theologians are not.  Such theologians are often inclined to point out that other theologians who are not part of whatever sex-related, race-related, or ethnicity-related group classification they fall into are not open about how their cisgender, male, white, non-Hispanic theological projects aren't open about their biases.

Specifically, that cisgender white males of non-Hispanic cultures won't admit how being cisgender, or male, or white, or non-Hispanic shapes how they view theology.  And it's generally true that cisgender white males won't admit how their experiences with regard to those aspects of their lives shape their theology.  There are of course exceptions to this.  Some male theologians are quite explicitly engaged in a theological project of reclaiming masculinity in Christianity.  And White nationalists of the Christian Identity movement and nationalists of other stripes in Europe and Russia will explicitly have a nationalistic or ethno-phyletistic way of viewing theology.

Interestingly, the Eastern Orthodox churches condemned this phenomenon as a heresy.  And this makes sense.  When anything other than Christ (found in His Eucharist, His Sacred Tradition, and Sacred Scripture) is the primary lens through which we understand who we are and how we relate to God, we end up as lost sheep who have strayed far from the path that leads to life.  These nationalistic race-based and ethnicity-based theological movements are wrong because they let socio-political concerns take an over-sized role in understanding Christian theology.

Inevitably, using socio-political concerns to evaluate theology in this way causes problems, either because it becomes heretical or it leads people to heresy down the road.  This is true not just of White nationalist movements, but also of Black Liberation theology, Latino theology, et cetera.  Admittedly, I'm much more sympathetic to Black Liberation theologians and Latino theologians, because they at least have as a part of their analytical framework a profound concern for those who are oppressed, vulnerable, and impoverished.  Those are concerns we should have as Christians.

The theology of White nationalism isn't quite so willing to be engaged with those concerns in a global way.  It's even more myopic than other race-based or ethnicity-based theological approaches, though the others do tend to be somewhat myopic as well, both in terms of ethnicity and/or race and political causes (the latter of which I will return to later).

This ethnic or racial myopia isn't something we really see in the early Church.  St. Moses the Ethiopian (also known as Abba Moses the Black) wasn't doing Ethiopian theology or Black theology.  Nor, though he was one of the Desert Fathers, was he doing Desert theology.  Abba Macarius of Egypt wasn't doing Egyptian theology.  And Amma Syncletica of Alexandria wasn't doing Alexandrian women's liberation theology, nor was St. Mary of Egypt doing Egyptian feminist theology.  They were doing Christian theology in a particular time and place rather than doing the theology of a particular time and place to impose on the whole Christian Church.

They were all engaging in universal Christian theology accepted by the whole Church, and that was because Christ was the lens through which they viewed all theology.  What often happens in contemporary contextual theology is that our particular socio-political situations are the lens through which we view all truth, including the truth about Christ.  White nationalists might believe that Jesus was White, for example, in contradiction of all the evidence about who he was.

Or someone engaged in Queer theology might conclude that Jesus was a transgender man, which has indeed been proposed recently in a popular online magazine and by transgender Christians.  While there's no good evidence for the claim, it is very appealing to people who want to re-shape Christian belief through the lens of their socio-political situation or contemporary beliefs.

And that's the fundamental problem with contextual theology projects that are based on the ethnic or racial or gendered experience of the theologian.  Instead of becoming a part of a synthesis of the teachings of many male and female apostles and saints across Ethiopia, Egypt, Libya, Greece, Syria, Rome, Turkey, India, and many other places, contemporary contextual theology ends up undermining that universal synthesis by taking a particular situation as a way of interpreting the Gospel rather than taking the Gospel as a way of interpreting their particular situation.

What I hope is that we can find an effective answer to my friend's question.  How can we have a Latino theology, or Black Liberation theology, Queer theology, or Feminist theology that is coherent with the whole Christian tradition?  Unfortunately, I don't think most theologians doing the work in those areas want to find an answer to that question.

While the whole Christian tradition has room for the various analytical approaches used by many men and women from all over the world who have lived the Christian life, it doesn't seem to have room for the analytical approach used in contemporary contextual theology projects.  Various approaches that can be loosely grouped under the umbrella of Critical Theory seem to all lead to the conclusion that the Christian synthesis is wrong and oppressive, that we need to overturn key components of that synthesis.

And what's more, in many cases they can't seem to even imagine that the theological synthesis of the Church isn't a contextual theology also, specifically that it's not in fact the White Male Supremacy and European Imperialism theology.  And I suppose that if one does theology explicitly through the lens of one's particular socio-political situation, it might be hard to imagine that anyone doesn't do theological work in the same way.

But at least for myself, I don't.  I don't like it when I find vaguely misogynistic views among Church officials.  I don't like it when Christians misunderstand transgender folks and condemn them unfairly.  I don't appreciate the racism that I see among some Catholics, and the lack of concern that some of them have for our Black and Latino brothers and sisters in particular.

Fortunately, I've found a way to authentically incorporate those concerns into the traditional Christian synthesis when it comes to my personal theological work.  But that only happened because I made a consistent effort to do so.  Unless others who are working on contextual theology projects do the same, it will be very difficult to find a good answer to my friend's very important question. 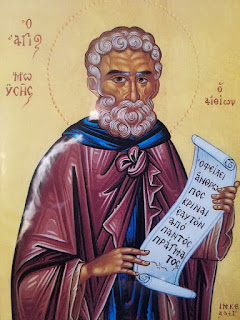 Note:  The above is a picture I took of an icon of St. Moses the Ethiopian.  The flashing of sunlight reflecting off of its surface give it an interesting aesthetic quality.
Posted by Samuel C Bunch at 10:17:00 AM