It's been a while since I've read any articles from Matt Walsh, but this one was shared with me recently, and it has created quite a controversy, as much of his writing does.  In this one, he makes the argument that Christians should not, generally speaking, participate in yoga.

I'll be very candid about my own situation with yoga:  I have never taken a yoga class, and don't see much point in starting now.  I have a very nice stretching routine of my own that leaves me loose and limber and strengthens the muscles.  That said, I have studied it from a religious perspective and have a basic understanding of its spiritual implications and its relationship to Hinduism.


See Related Podcast and Post: The Yoga of Krishna

Based on my familiarity with the religious side of yoga and my traditionally-minded Catholic faith (which I share with Matt Walsh), you might understandably assume that I agree with him that Christians should avoid yoga in general.

But I don't.  That said, I do think he makes a better argument than most Christians who take an anti-yoga stance, and that Christians should take this argument seriously.  Also, he correctly points out the poor reasoning for participating in yoga that is commonly utilized by Christians to justify their choice, and that's worthwhile.

First, let's examine some of the bad arguments made by Christians against yoga.

1.  Performing yoga poses is inherently a Hindu spiritual practice regardless of your intentions, and regardless of your spiritual state it will draw you into contact with demonic activity and/or cause you to be worshiping pagan gods.
2.  Yoga is a practice of a pagan religion and participating in it is risky because it could lead you to explore pagan religions and eventually convert to one of them.


Argument #1 is, to put it mildly, patently absurd.  If that were true, any child playing around performing odd animal poses after being inspired by visiting a zoo would accidentally fall into the worship of pagan gods/exposure to demonic activity when they happened to be in a pose used in yoga classes.  This is not an argument that, on its face, has any real merit to it.

Argument #2 has some merit to it, but within limits.  It's certainly true that exposure to Indian religions, whether via yoga classes that emphasize Indian spirituality or visiting a Buddhist temple, can lead people to grow interested in those religions and move away from Christianity.  That is a good point to make.  On the other hand, many yoga classes are so secularized and stripped of traditional Indian spiritual meaning that this risk becomes very, very low.  A devout Christian attending these highly secularized kinds of yoga classes probably has basically zero risk of converting to an ancient Indian yogic tradition.

Matt Walsh makes a slightly different argument.  He asks us to consider that, if it's the case that there are other forms of exercise that give us the same benefits and aren't embedded with or drawn from Indian yogic traditions, why not just do those forms of exercise instead?

For two, many people seem to find it genuinely therapeutic and physically healthy once they try it, or they do "hot yoga" because it's a fitness challenge.

For three, some people do it because they are interested in exploring other religious traditions.  These folks are probably the ones that Matt Walsh and other Christians who speak out against yoga are most worried about, and that's completely fair.  Those are the folks they should be most worried about.

But he and others are not just worried about the folks who are interested in exploring other religious traditions.  He makes an additional argument to support the claim that performing yoga poses is inherently a Hindu spiritual practice regardless of your intentions.

It's a pretty good prima facie argument, and I want to address it.  Walsh claims that:


To his credit, this was true at one point.  In fact, for most of recorded human history, it was true.  That's because for most of human history, what people meant by the word "yoga" is the general category of the kind of spiritual practice Walsh is describing (albeit somewhat overly simplistically).

But in comes our consumeristic American culture with its ability to de-sacralize and de-spiritualize almost anything to make it palatable to as many people as will pay for it.

Does anyone really imagine that people who wear rosaries as a fashion statement are participating in a Roman Catholic contemplative spiritual practice whether they intend to or not?  Does anyone really imagine that people who have Byzantine icons of Our Lady (solely because they think it's a nice painting to hang on the wall that matches the decor) are necessarily participating in Eastern Christian veneration of icons?

Does anyone take seriously the idea that Western atheists who practice forms of Buddhist meditation strictly for its therapeutic benefits are actually attaining enlightenment via non-clinging as the Buddha instructed?

In the same way, when people who are focused on yoga as a spiritual exercise use the term "yoga" what they mean is not all the same thing as those who only know of "yoga" as extra-challenging stretching techniques.

So when Matt Walsh claims that the definition of "yoga" is such that it's an inherently spiritual practice, that's true for the traditional definition of yoga, but not for the new consumeristic American definition of yoga.  And so his argument there really doesn't apply to the latter.

If it's just because the yoga classes are all that's available and you value the group exercise, then that's fair enough.  If you as a Christian have an attachment to Eastern religious traditions and want to do it for that reason, then it's probably best to do some soul-searching and prayer to discern God's will. 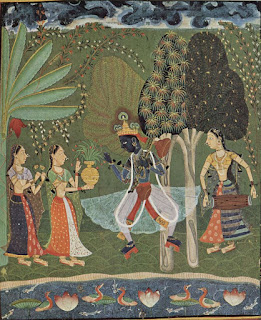 The above is a depiction of Krishna dancing.
Posted by Samuel C Bunch at 8:10:00 PM