A while back, one of my friends and I were discussing the nature of the soul, specifically the understanding of the soul held to by Fr. Robert Barron, who has since been appointed Bishop.  From what I understand, he has been strongly influenced (like many Roman Catholic theologians and philosophers) by a Thomistic framework for understanding issues of the soul.  My friend suggested that then-Fr. Barron was a dualist with regard to the body and soul and critiqued what I will call for convenience the body-soul dualist position.  Specifically, it was proposed that Barron was committed to a body-soul dualism because he believes that souls have a sex, more precisely that they are either male or female.

I very much agreed that body-soul dualism is an erroneous position.  I do, however, dispute that Barron is a body-soul dualist precisely because he is grounded in the Thomistic framework for understanding the soul.  As a disclaimer, I am not a Thomist, and I also have no particular love for the Scholastic tradition in general.  Nonetheless, in the interest of fairness, I think it is my obligation to present a more accurate understanding of the Thomistic perspective on the soul so that my friend can critique the position correctly.

Even the experts over at the Stanford Encyclopedia of Philosophy cannot lump Aquinas in with the dualists.  His philosophy, like much ancient thought, violates the simplistic boundaries which we modern thinkers tend to place on philosophies.

"Philosophers nowadays will want to know how this account of substance places Aquinas on the question of the relation of body and soul with respect to Dualism and Physicalism. Not easily. Aquinas maintains that the soul is capable of existing apart from the living body after the death of the body, because the soul is incorruptible. This might suggest that he is a kind of Substance Dualist, the soul being one substance and the body another, with the soul “interacting” as it were with the other substance, the body. However this picture fails to recognize the Aristotelian terms of the account that Aquinas provides of soul and body. Thomas knows and accepts Aristotle's assertion in De anima II.1 that it is as pointless to ask whether soul and body are one as it is to ask whether the seal and the wax are one--they are."


Thomas Aquinas (and by extension Barron) believes that the soul is one; it is the principle from which all of our activities spring forth.  The soul accomplishes these activities by means of the faculties of the soul:

For Aristotle, the soul is one, but endowed with five groups of faculties (dunámeis): the "vegetative" faculty (threptikón), concerned with the maintenance and development of organic life; the appetite (oretikón), or the tendency to any good; the faculty of sense perception (aisthetikón); the "locomotive" faculty (kinetikón), which presides over the various bodily movements; and reason (dianoetikón). -- The Catholic Encyclopedia

For Aquinas, it could be fairly said that just as those of us who have rational souls are not straightforwardly rational at all times and in all ways, so too those of us with male souls need not be straightforwardly masculine at all times and in all ways.  Because the multiple faculties of the soul are in constant interplay, it is not a simple matter to predict which faculties will dominate the activities of the soul, and that only grows more difficult when free will is entered into the equation.

As a result, there is no particular reason to believe that the Thomistic position warrants the view that a male soul would only have what we tend to think of as masculine inclinations, or that it would have to understand itself as masculine if it were in fact a male soul. There is, therefore, no necessary commitment to a body-soul dualism which follows from a Thomistic account of the soul in which souls have a sexual identity.

Not only is Aquinas explicitly not a dualist, the dualist conclusion that the body and soul are truly separate are ruled out by his Aristotelian premises about the soul.  There is not any way for Aquinas to get to the dualist position even if he desired to do so. 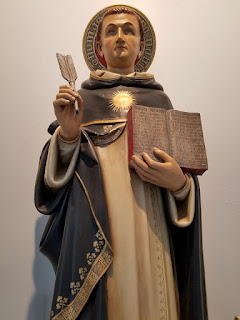 The above is a picture I took of a statue of St. Thomas Aquinas at the Dominican House of Studies.
Posted by Samuel C Bunch at 8:29:00 PM