Waking Up: Sex, Drugs, and Near Death Experiences

In the fifth chapter of Waking Up, Sam Harris helpfully points out some potential pitfalls of contemporary spiritual seeking and practice.  He leaves us with some warnings about the alternatives after discussing the benefits of meditation in the fourth chapter.  This, I think, is necessary.  I know from my own spiritual exploration that there is a vast gulf between healthy spirituality and popular spirituality, and I believe that we have a duty to help others avoid the unhealthy spiritual paths, many of which are spiritual in name only.

Speaking of names, people often follow someone with a special name, whether because it is well known or obscure.  People often want to find what they may call a guru, an enlightened teacher of spiritual truths that are for whatever reason otherwise inaccessible to us.  And as Sam Harris points out, it can be difficult to find a good guru when we have no easy standards to apply for discerning a good one from a bad one.  He offers the following example from The End of Faith as an illustration:

"I know a group of veteran spiritual seekers who, after searching for a teacher among the caves and dells of the Himalayas for several months, finally discovered a Hindu yogi who seemed qualified to lead them into the ethers.  He was as thin as Jesus, as limber as an orangutan, and wore his hair matted, down to his knees.  They promptly brought this prodigy to America to instruct them in the ways of spiritual devotion.  After a suitable period of acculturation, our ascetic--who was, incidentally, also admired for his physical beauty and for the manner in which he played his drum--decided that sex with the prettiest of his patrons' wives would suit his pedagogical purposes admirably.  These relations were commenced at once, and endured for some time by a man whose devotion to wife and guru, it must be said, were now being sorely tested.  His wife, if I am not mistaken, was an enthusiastic participant in this 'tantric' exercise, for her guru was both 'fully enlightened' and as dashing a swain as Lord Krishna.  Gradually, this saintly man further refined his spiritual requirements, as well as his appetites.  The day soon dawned when he would eat nothing for breakfast but a pint of Haagen-Dazs vanilla ice cream topped with cashews.  We might well recognize that the meditations of a cuckold, wandering the frozen-food aisles of a supermarket in search of an enlightened man's enlightened repast, were anything but devotional.  This guru was soon sent back to India with his drum."


It seems very unlikely that this guru was engaged in the spiritual practice of Killing the Self as a true ascetic would be. It seems more likely that he was killing his craving for ice cream and for sexual release by abusing the trust placed in him by his erstwhile students.

This is not an isolated incident, unfortunately.  There are plenty of cases of spiritual teachers abusing their authority and using devotees for sexual gratification (just as it does in secular organizations with charismatic figures), and this happens in both the major religions and in minor cults that fade away quickly after the charismatic leader dies or is revealed as a charlatan.  Abuse of authority is inevitable in a world filled with morally imperfect beings.  It's just that the way we often regard our spiritual leaders is dangerous, and that the way spiritual leaders often come to regard themselves is also dangerous.

Even in religions like Christianity that claim we are all sinful and prone to moral failure and Islam which is explicitly suspicious of clericalism, there is a strong tendency toward an idolization of clerics.  Harris helps us to understand why that is the case:

"A relationship with a guru, or indeed any expert, tends to run along authoritarian lines.  You don't know what you need to know, and the expert presumably does; that's why you are sitting in front of him in the first place.  The implied hierarchy is unavoidable."


While we may not be able to avoid a functional hierarchy, explicit or implicit, what we can do is try to mitigate our tendency to idolize experts, or worse, to idolize non-experts because we cannot discern whether a person is or is not an expert.  We can keep in mind that every person has moral failures, even the experts, and that we need to be very careful not to idolize another person no matter their status.

This is of course not the only pitfall for spiritual seekers. Drugs have long been utilized by those seeking an experience of the spiritual type that would provide them with a release from the cares of this world, sometimes in the context of religious ceremonies.  Typically, the drugs used for this purpose are significantly stronger than alcohol or tobacco with regard to their effects on our perceptions, able to profoundly alter our conscious experience.

And Sam Harris is no stranger to using drugs, albeit in a more controlled, responsible way than most who use them.

"...if they don't try a psychedelic like psilocybin or LSD at least once in their adult lives, I will wonder whether they had missed one of the most important rites of passage a human being can experience.

This is not to say that everyone should take psychedelics.  As I will make clear below, these drugs pose certain dangers.  Undoubtedly, some people cannot afford to give the anchor of sanity even the slightest tug.  It has been many years since I took psychedelics myself, and my abstinence is born of a healthy respect for the risks involved.  However, there was a period in my early twenties when I found psilocybin and LSD to be indispensable tools, and some of the most important hours of my life were spent under their influence.  Without them, I might never have discovered that there was an inner landscape of mind worth exploring."


He goes on to add that taking these drugs is always a roll of the dice, that it is not to be undertaken lightly.  And this is from a guy who, like me, opposes the War on Drugs and sees it as a failure.

"There is no getting around the role of luck here.  If you are lucky, and you take the right drug, you will know what it is to be enlightened (or to be close enough to persuade you that enlightenment is possible).  If you are unlucky, you will know what it is to be clinically insane.  While I do not recommend the latter experience, it does increase one's respect for the tenuous condition of sanity, as well as one's compassion for people who suffer from mental illness."


This is something Harris knows from experience; he details a very bad trip on LSD elsewhere in this chapter.  And he recognizes that the use of psychedelics is not a matter of them always producing wonderful effects, particularly on a large scale.

"However, we should not be too quick to feel nostalgia for the counterculture of the 1960s.  Yes, crucial breakthroughs were made, socially and psychologically, and drugs were central to the process, but one need only read accounts of the time, such as Joan Didion's Slouching Toward Bethlehem, to see the problem with a society bent on rapture at any cost.  For every insight of lasting value produced by drugs, there was an army of zombies with flowers in their hair shuffling toward failure and regret.  Turning on, tuning in, and dropping out is wise, or even benign, only if you can then drop into a mode of life that makes ethical and material sense..."


In the end, he recommends that these drugs not be used regularly when there are more safe, reliable methods available.  He recommends meditation, of course.

"I believe that psychedelics may be indispensable for some people--especially those who, like me, initially need convincing that profound changes in consciousness are possible.  After that, it seems wise to find ways of practicing that do not present the same risks.  Happily, such methods are widely available."


Of course, drugs and meditation are not the only ways in which we can experience profound changes in our consciousness.  Harris devotes some time to dealing with the specter of what are generally called Near Death Experiences and the conclusions many people draw from them.

He focuses specifically on a couple of popular cases in recent years that have captured the imaginations of a lot of people in the U.S.  One is the experience of a very young child of a pastor detailed in a book entitled Heaven is For Real (which I've read myself and found interesting but not convincing).  The other, which he spends more time addressing systematically, is Proof of Heaven: A Neurosurgeon's Journey into the Afterlife, written by Eben Alexander.

Having read the excerpts, I am even less convinced by Alexander's account.  Harris seems beyond the point of being unconvinced.  As a neuroscientist, Harris minces no words in dealing with Alexander's account of the profound near death experience he encountered that fateful day.

"The proof he offers is either fallacious (CT scans do not measure brain activity) or irrelevant (it does not matter, even slightly, that his form of meningitis was 'astronomically rare')--and no combination of fallacy and irrelevancy adds up to sound science."


Like Harris, I haven't found any accounts of near death experiences that lead me to believe in a particular religious tradition, though there are certainly accounts that happen to cohere very nicely with my religious beliefs.  This is primarily because a few anecdotal experiences of people on the edge of death are not sufficient grounds upon which to build an eschatology, at least in my not very humble opinion.

Unfortunately, this is a spiritual pitfall many people can fall into.  Not that they will have a profound experience like Eben Alexander, but that they may easily believe that a certain religious belief is true on the shaky grounds that someone had an experience that seemed like heaven to them.

We humans tend to believe in the power of our visions to such an extent that it obscures our vision of what's important and how we discover what's true.  That is perhaps the most important lesson of this chapter, whether it's sex, drugs, or death that's obscuring our vision. 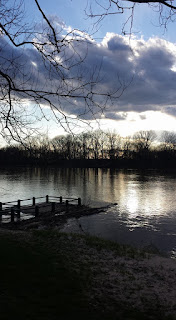