Fair Questions: Why do Catholics call Mary the Queen of Heaven?

Today was an interesting day for discussions about Mary.  One of my friends called me with a question about how to respond to a Protestant friend who was concerned that using the title "Queen of Heaven" for Mary was an act of worship or logically implied worship.  And then at lunch another friend asked me if the Orthodox owner of the restaurant worshiped Mary, and I had to explain that neither the Greek Orthodox Church (to which he belongs) or the Roman Catholic Church teach that Mary is to be worshiped.

Wikipedia has a good explanation of how that title was developed historically, beginning with the Council of Ephesus in the fifth century.  One thing to note is that Ecumenical Councils do not propose new doctrines, but rather define existing Christian tradition as doctrinally correct and/or clarify the theological underpinning of a doctrine when it is in dispute.  The doctrines about Mary were a response to the Christological controversies in the early church; the Church was not defending their treatment of Mary, but rather their view of Christ as truly God and truly man.

So why is this so hard for post-Reformation Christians, particularly those steeped in modern egalitarian ideas like myself?  I would like to propose an explanation that makes sense in light of my own personal struggles with coming to terms with the Holy Theotokos and in light of the sorts of philosophical assumptions we Americans tend to make out of our Classical Liberal heritage.  The American Christian sense of hierarchy has every human being as deserving of equal honor and God alone deserving anything and everything above that.  The ancient hierarchy was much more complicated.

These distinctions were readily understood to people of the time.  Any good Queen's servant who grew up in the ancient hierarchies knew perfectly well that the Queen was not God and did not deserve worship. We don't worship Queens simply because they are Queens, and even then Christians reserved worship for God at the peril of their souls.  Aha!  But what about the fact that God is the King of Heaven and the ancient Church claimed that Mary is the Queen of Heaven?  Doesn't a Queen deserve the same honor as a King? Doesn't it logically follow that she should be worshiped?

Not in a patriarchal culture in which the King ranked higher than the Queen.  And even supposing that the King and Queen did not exist within a patriarchal framework, the honor given her would be based on her role in society as it was for anyone else.  If the Queen was the mother of the ruling King, then it's not true that she would be given the same honor in that culture because she does not have the role of ruler.

This of course will seem odd for someone unaccustomed to living in a society rich with various ranks and levels of honor, and they may still disagree with calling Mary the Queen of Heaven, but the ground upon which their objection to the title will be built is a cultural one rather than a rational one.  I can respect someone who admits that their objection to the title is cultural and proposes that we get rid of the title "Queen of Heaven" because it doesn't suit the cultural milieu of the day.

I disagree with that position, but it's a perfectly coherent position to take for someone who believes that Christianity should be reshaped in the image of the contemporary culture.  For those of us who believe that the contemporary culture needs exposure to the insights of the ancient world into which Jesus was born, that doesn't seem like such a good idea.  Hopefully that is at least understandable to the modern American Christian, and hopefully these disagreements can be made charitably and in good faith with our brothers and sisters in Christ. 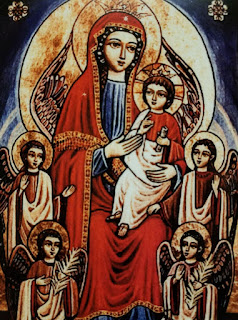 Note: The above is a picture I took of a Coptic icon called the King and Queen of Heaven, depicting Jesus the King as a child, Mary His mother enthroned, and the angels surrounding them.

(1) To those who prefer syllogisms, the following may be helpful.

His royal title is not why He is worshiped.  Thus Premise One is false and the syllogism fails to demonstrate the conclusion.

In the same way, we also know that the following reasoning is incorrect:

This syllogism has the same problem as the previous syllogism.  Premise One is false and the syllogism fails to demonstrate the conclusion.