Fair Questions: Why bother switching traditions within a religion if you've found the right one?

A friend asked me what should provide the impetus for a person who has found the right religion (whatever they happen to believe that to be) to move between different traditions within the religion.  For example, why go from Vajrayana Buddhism to Theravada Buddhism, or from Wahhabi Islam to Sufi Islam, or from the Church of Christ to the Roman Catholic Church?

Having done that last one, I could simply answer from personal experience, but I think there are plenty of reasons for that choice, and not all of them were my reasons.  Some of those reasons are better than others, and I think it's helpful to look at a variety of them.

On the affirmative side of the question, a person might make the decision to switch for entirely affirmative reasons, though this is arguably even less common than doing it entirely out of negative motivations.  A person might switch from one tradition to another because, while they see their existing tradition as having some of the truth and many good practices, they see another tradition as having more of the truth and many more good practices.  Or someone might choose another religious tradition because it will protect them and their family from political reprisals in a country in which their existing religious tradition is widely persecuted.  Or they might switch to another religious tradition because it will make their spouse happy and/or bring peace in their family life, assuming that the traditions are equal in other respects.

I would suggest that this is because human beings make all their decisions based on the same rough categories of motivations, and perhaps more controversially, because there is very little difference between how we ought to choose between practicing Baha'i and becoming a Sikh and how we ought to choose between staying in the Church of England and being chrismated in the Greek Orthodox churches.  I realize that this needs some explanation, because we intuitively tend to think that because there is generally a bigger difference in belief and practice between religions rather than among their traditions there ought to be a bigger motivation to make the switch.

I think some examples might be useful for understanding why that might not be true.  For one, we might choose to leave a particular tradition within a religion because we think it's not actually a part of that religion.  For example, a person might leave Sufi Islam because they believe that it has corrupted the teachings of the Prophet and that it is no longer truly Islam.  Or a person might leave the Church of Jesus Christ of Latter-Day Saints because they come to the conclusion that it's not actually a Christian church, then becoming Methodist.  In such a case, what we might see as a switching between traditions in the same religion is being done by the person making the choice precisely because they disagree that the traditions are part of the same religion.

For two, it's not clear to me that switching between religions is necessarily a much bigger jump in terms of doctrine or practice than switching between traditions of the same religion.  The jump from a prosperity Gospel preaching nondenominational mega-church run by a wealthy pastor to a tiny Roman Catholic parish run by Franciscans who live in poverty and preach a lifestyle of ministering to the poor in poverty would not be all that less large of a jump than if the same person were to jump to becoming a Buddhist monk living an austere life in a monastery in the Himalayas.  In both cases, the jump would be truly immense, and the similarities to the previous religious tradition would be very limited, though real.

I don't think it's a stretch to say that both in terms of belief and practice, it would be an easier transition from being a Trappist monk in the Roman Catholic Church to becoming a Buddhist monk in the Vajrayana tradition than the transition from being a non-denominational mega-church pastor to either of those monastic traditions.  All that taken into account, let's go back to the original question and then on to another one which follows from it.

I'm not going to propose that there is only one factor that we ought to consider when making the decision to switch between religious traditions.  What I would suggest is that we should at least prioritize some concerns ahead of others.  For example, I see truth as a deal-breaker.  If I do not believe that a religious tradition has truth (at least in the sense that it is the most true), then I think that as a person of integrity I ought to leave it and switch to whatever I find to be most true.

When confronted with that scenario in relation to Mahayana Buddhism and Roman Catholicism, I chose to try to articulate yet another principle to help break the tie, which is to say that I chose the path that would be harder for me and lead me to more radically transform my life.  In part, I was trying to avoid utilizing the self-serving preferences that can so often lead us astray.

If we happen to be in a situation in which our family members or spouse happen to belong to one of the religious traditions we are choosing between, then we might select the one to which they belong in order to bring benefit to the family as a way of breaking the tie.  Or we might select the religious tradition less likely to cause our family to be persecuted in order to break the tie, assuming that all else is equal between the two choices.  Or we might select the one that is simply better for our political career interests, all else being equal.

The observant reader may notice that I have not yet used an example from my previous category of experiencing a moral wrong done to a person or their family by a member of a religious tradition.  That's very intentional on my part.  While I do think that could be used as a tie-breaker when all else is equal, I don't think it's a very good reason for rejecting a religion in general for reasons I've articulated before.

The natural question to ask at this point is: What might prompt us to NOT switch to another religious tradition?  If we believe that all religious traditions are equally untrue or equally true and that their practices are equally efficacious, then it would make sense to not bother switching.  While we could invoke one of the aforementioned tie-breakers, I'm not sure that we have any moral obligation to do so.  It's certainly possible that we would, depending on the moral framework we are using, but it doesn't seem obvious that we would be morally obligated to switch without a compelling reason.

While this is hardly an exhaustive inventory of motivations for switching between religious traditions, I hope this at least provides some food for thought to those considering moving from one religious tradition to another.  As always, I encourage seekers to do lots of research before making a decision, both in terms of reading the sacred texts of a religious tradition and experiencing its practices.

Related: The Blessing of Spiritual Homelessness 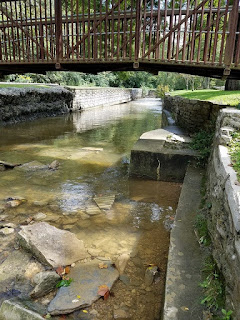 Note: The above is a picture I took while out walking.
Posted by Samuel C Bunch at 7:57:00 PM