In The Garden of Eden: The New Eve

For the early Church Fathers who were reading the Hebrew scriptures (whether in Greek or Hebrew), those scriptures were read through the experiences of the Apostles and other early disciples of Jesus Christ that was handed on to them.  This early Christian tradition that organically grew out of the witness of the first Christians was the lens through which the Hebrew scriptures were interpreted, because the New Testament had not been compiled at this point and could not yet serve as the lens through which the Old Testament is read.

At that point, all the early Christians had as a lens through which to read the Old Testament was Christ Himself and the firsthand accounts of His actions which they had received by oral tradition.  And at that point, it made a great deal of sense to think of Christ as the new Adam, especially because Paul was already writing to the early Christian community in Rome about the connection between Adam and Christ, which is why even contemporary post-Reformation Christians sometimes agree with the ancient churches about that connection.

And unsurprisingly, once we've accepted the theological connection between the Fall caused by Adam's Sin and the Resurrection caused by Christ's Incarnation, we also begin to wonder about Eve and her role in the Fall.  If Eve helped facilitate the Fall by giving the fruit of the Tree of Knowledge of Good and Evil to Adam, then is her action somehow matched (as Adam's Sin was) by God's entrance into the world?  Did God's plan of salvation include the balancing of the scales previously weighted by Eve's disobedience in order to match her disobedience with a greater example of obedience?

This tilting of the scales is what happened when the sinless Christ died to offer eternal life to the human race, the eternal life intended for us in the Garden of Eden which was lost due to Adam's Sin.  The scales of God's justice were tilted in favor of restoring the human race to eternal life through the weight of God's mercy which bore all our sins that begin with a slavery to transient desires and lead inevitably to the final death.  It was Mary who bore Him who was God's mercy incarnate come to free us from sin and death.

Unlike Eve, whose pains of childbirth were a result of an easy disobedience in one moment, Mary's childbirth was the result of a difficult obedience over the course of a lifetime.  Where Eve's taking of the fruit of the Tree was a theft of that which was only God's to give, Mary's giving of the fruit of her womb was a cooperation with God's plan to give eternal life to His children.  It was Eve who was taken out of the rib of Adam, and it was the New Adam who was born from the womb of Mary.

Through the obedience of Mary, God's desire for humanity to have a full participation in the eternal life of divine love as children of God was brought to the fruition which was intended for Eve.  Through Mary's act of love, Love Himself entered the world so that he might descend into Sheol and lift Adam and Eve up into the eternal life in the divine household of Love.

Through the life of Mary, all that was lacking in the faithfulness of Eve was filled to overflowing, and  in the life of Mary every missing of the mark of divine love committed by Eve was lifted up by God's grace so that the arrow of Love would not fall short of His glory.

Mary is the New Eve, the handmaid of the Lord, and blessed is the fruit of her womb which she bore into a world full of death and sin so that the world might be filled with life and love as the Father intended in the beginning. 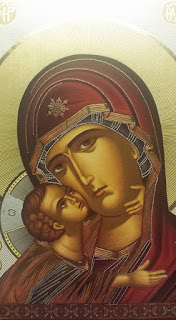 Note: The above is a silver-plated icon of the Holy Theotokos with the infant Jesus purchased from orthodoxmonasteryicons.com and painted at the Paracletos monastery.
Posted by Samuel C Bunch at 5:56:00 PM