The Heritage of the Misbaḥah

I've mentioned before that how we engage with the beliefs and practices of other religions is something we need to be careful and intentional about with regard to our decision-making process.  So when I received a misbaḥah, my initial plan was to study it rather than to use it as a prayer aid, because I am leery of appropriating the practices of other religions and doing so in a way that doesn't reflect their beliefs.

So, for example, if someone were to give me a set of Tibetan Buddhist prayer beads, I wouldn't disrespect their tradition by turning it into a mere decorative adornment or by repeating the associated mantras without the meaning and intention it would have in Tibetan Buddhism.  And in the same way, I wouldn't disrespect the Islamic traditions that use the misbaḥah (known in some Islamic countries as tasbīḥ) by treating it as mere decoration or reciting the dhikr without the sincere intention to practice an Islamic form of prayer.

I am interested in learning the 99 Names of Allah that are recited on a 33-bead misbaḥah in three rounds (or a 99-bead misbaḥah in one round) as a matter of trying to understand Islam's practices, but it won't be a regular form of prayer for me.  What I have been making a regular form of prayer is the Christian practice of praying the Jesus prayer using the beads to count them out, of which there are the same number as the number of years on Christ's life on earth.

It may seem like an odd coincidence that a 33-bead prayer aid used by Muslims would also be used by Christians, but there's a pretty straightforward reason for that.  Muslims adopted the practice after encountering Christian ascetics using it.  The 33-bead configuration was one of several used by Christian ascetics on their prayer ropes which they sometimes used to help them pray the Jesus prayer rather than various other prayer options like the Psalter or Akathist hymns.

Because Islam was formally founded by the Prophet Muhammad more than 600 years after Christianity arose, it was in its first stages of growth when Christianity was already well-established in the Middle East and North Africa as well as Europe and Asia.  Judaism also had a smaller presence in many areas in which Islam later became dominant.  Given this situation, Islam needed to find ways to respond to Christian and Jewish theology and practice in order to proselytize effectively and gain converts.

So it's not surprising that Jesus is recognized as a very important prophet in Islam, or that many of the major figures of the Tanakh are also recognized as prophets by Muslims.  And it's also not surprising that devout Muslims living around a bunch of Christians would encounter a Christian prayer rope or a set of prayer beads and figure out that it would be a good way to help them to count through their own prayers while maintaining focus.

Some Muslims (often of the Salafi school) don't think that using prayer beads is the right practice and that one should use the hand just as the Prophet Muhammad counted through his prayers.  Nonetheless, they probably aren't going away any time soon, and I expect that many Muslims and Christians will have their misbaḥah close to hand for centuries to come. 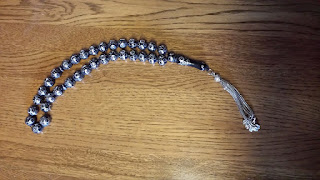 Note: The above is a picture of the misbaḥah given to me by a friend who picked it up in the Middle East.  Its geometric designs are obviously Islamic and quite lovely.
Posted by Samuel C Bunch at 7:35:00 PM