Fair Questions: How long was I an American Rite Catholic?

I should stop here and point out that there is no American Rite of the Catholic Church officially.  The Bishops have not recognized any such thing, and might be either confused or offended by my calling our Christian way of life here in these United States the American Rite.  And for some of them, it might even be due to the fact that there is an American Rite (better known as the York Rite) of Freemasonry, especially because becoming a Mason is still something Catholics are obliged not to do.

So why do I think it's important to call the set of unique musical, devotional, theological, and liturgical practices and beliefs common to the average Catholic parish in the United States the American Rite?  It's primarily because I like precise language that reflects the facts of the situation without being pejorative about those facts.  I tend to think that many Catholic Traditionalists are unfairly pejorative in their labels for what I'm describing here, and I do not want to engage in that sort of thing myself.

A Roman Catholic pre-Vatican II Traditionalist, by the way, would definitely not refer to the common Catholic way of life in the U.S. as the American Rite.  They generally take for granted that what has been officially recognized by the Church in the past is correct, and they are not generally fond of novelties.  So my use of the phrase "American Rite" would probably not be viewed positively at all.  They would likely argue that I was using the wrong term by calling it a Rite, and at least in part because calling it a Rite would seem to them like giving what they sometimes call New Church or Neo-Catholic too much credit.

For them, the American Rite is just an abused and neglected Roman Rite, stripped of the beauty of its Gregorian chant, divested of the piety of its traditional Roman Rite devotions, lacking in the theological riches of the Scholastic period, and forced to live in the horrible conditions of aging Hippie camps surrounded by formerly drug-addled wannabe revolutionaries.  And on occasion, subjected to Masses in which the participants and/or celebrants wear clown costumes or Halloween costumes and perform "liturgical dance" as if their gyrations were some form of worship.

The average Catholic Traditionalist is a devout Roman Rite Catholic, and won't put up with the U.S. Baby Boomer customization of the liturgy to suit their generational fads or their subsequent clinging to those fads even as their popularity and relevance fades.  And though it's true that the Baby Boomers captured the liturgy in the U.S. and re-made it in their own image to a certain extent, I don't think that inculturation is inherently a problem.

I've attended a variety of different liturgies and participated in more recent and more ancient Christian cultures.  I know from experience that having a culturally influenced and culturally appropriate set of Christian practices is perfectly fine.  While it's true that the disobedience of many Baby Boomer priests and their students is a serious moral problem that has had very deleterious effects, inculturation itself is not a problem.

I hope that there is one day an officially recognized American Rite, that a genuine inculturation happens so that the best of American culture can fuse with the best of ancient Christianity that both meets the needs of Americans and stays true to Church teaching and praxis.  But for now, what we have is an American Rite that was manufactured by one generation rather than an American Rite that gradually developed by holy Saints of the American Church seeking to reform their lives by the teachings of Christ's Church.

And that American Rite, with its Anglo-American hymns and African-American spirituals (which I really enjoy), its distinctly American sign of peace and receipt of communion in the hand during the liturgy, its theology shaped by the American experience, and its American-style Bible studies, is what I was shaped by as I became Catholic.  It's what continued to shape me as I grew into my twenties.

As a teenager who was newly Catholic, I was profoundly moved to deepen my love of God in Eucharistic adoration as the amateurish guitar strumming so characteristic of American Rite Catholicism provided the background music for my angst-ridden teenage prayers.  My most profound mystical experience (a Eucharistic miracle) was set in the context of an American Rite liturgy surrounded by touchy-feely teens and their equally touchy-feely Baby Boomer chaperones.

As a college student still working on my first degree and taking too many philosophy courses, I learned a great deal about developing Christian relationships and systematic moral theology, about the Franciscan spirituality and the Jesuit spirituality which was appropriated by Baby Boomers and customized to fit their political leanings in many cases.  And it did me a lot of good.  It also kept me from becoming orthodox for a while, but I would be remiss to not recognize the many good ways in which it shaped my life.

Over the course of my 20s, as I read the Code of Canon Law and the Vatican II documents on the liturgy and sacred music, I started to gradually become a Roman Catholic, realizing that while Pre-Vatican II Traditionlists might be wrong on certain things, they were correct that what most churches were doing was routine disobedience and not faithful to the traditions of the Church.  And then reading the early Church Fathers, the Desert Fathers, and the Western mystics made it clear to me that we had lost a treasure of immeasurable value in the post-Vatican II revolution.

I'm not sure when exactly in my twenties I became a Roman Rite Catholic, but I do know that it has happened as I dived ever more deeply into Church history and theology and prayer, and that I can't go back to the American Rite as it exists today until it accepts the fullness of the heritage the Church wishes to give it.

Related: The War of the Traditionalists 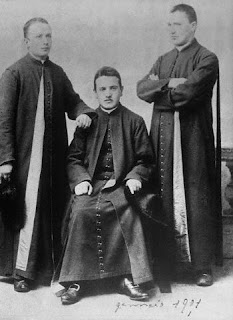