Fair Questions: Why do I call most American churches Post-Reformation churches?

For a while now, I've been calling most American churches by the general description of Post-Reformation churches.  This is not how most of my fellow Catholics described them, nor is it how members of most American churches would describe themselves.  I certainly didn't describe myself that way when I was attending Pentecostal churches, nor did anyone I knew.

My fundamental reason for calling these churches post-Reformation churches is that I believe in the importance of using precise and accurate terminology to the degree that it's possible.  When I use the term Protestant, I'm specifically referring to churches whose teachings are or contain a primary element of protest against Catholic teaching or the corrupt Church officials in pre-Reformation Europe.

Because it is very difficult to use a blanket term for these churches that were formed over disputes among Protestant church members or other Post-Reformation church members to describe such a wide array of churches who have been established based on thousands of minor variations, I decided to use Post-Reformation churches as a catch-all term while acknowledging that it has obvious limits.

Despite those limits, I find it very useful because it makes it clear that the theology, worship, and praxis of these churches is influenced by the Reformation while not over-emphasizing their connection to Reformation figures like Martin Luther, Huldrych Zwingli, or John Calvin.  In many cases, these Post-Reformation Christians have not read the works of Luther, Zwingli, or Calvin.  Even those who have some basic understanding of Calvin's view of predestination have usually not read the Institutes of the Christian Religion to gain a deeper understanding of Calvin's form of Christianity.

I gave up the Protestant Intuitions long ago myself, but they live on in the minds of many of my fellow virtuous and upstanding citizens, and there's no good reason to go around insulting them or describing them uncharitably, so I'll continue calling them Post-Reformation Christians. 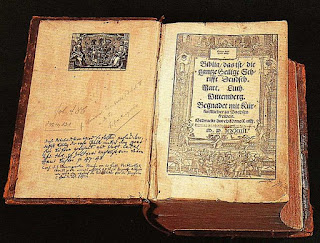 Note:  Above is a picture of Martin Luther's edited Bible translated into German.
Posted by Samuel C Bunch at 7:59:00 PM