Praying with Icons: The New Martyrs of Libya

The waves of the ancient sea move steadily
to and fro upon the ancient shore readily
soaking up the blood spilled on the grains
of sand which have seen many bloody reigns.

The lips of the martyrs refuse to deny Him,
the Son of God who died crucified for them
and rose again that they might have a life
beyond the cold stroke of the deadly knife.

The crowns of those who died for the Son
rain down around the glassy sea, all won
by those who remained faithful to Love's
command, so wise to be gentle as doves.

Those who die with Him arise with Him
into the heavenly life prepared for them
by the gentle Father with whom the Son
and the Holy Spirit are dwelling as One. 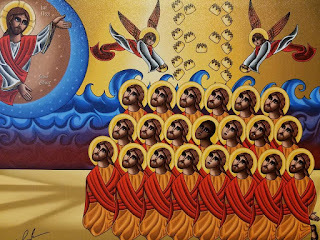 The above is a picture I took of an icon of the New Martyrs of Libya which I ordered from legacyicons.com.

Below is a list of the names of those martyrs whom you can ask for intercession. 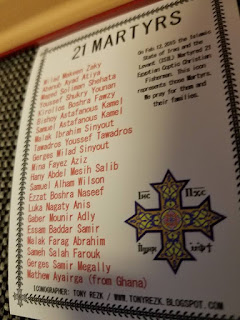