Fair Questions: Why am I not Eastern Orthodox?

I was recently asked by multiple people why I did not choose to enter one of the Eastern Orthodox churches after investing considerable time and effort in learning more about it.

I think this question arose because it was clear that I enjoyed the artistic traditions, and the ancient liturgies, and the pleasant community of the Eastern Orthodox parish I was visiting regularly.  Also, it was clear that I had an affinity for the works of the Saints commonly venerated by the Eastern Orthodox (and our Eastern Catholic brothers and sisters) in their liturgical calendar.

That's completely understandable, given that most of us make our decisions about religion based on affinity rather than on any number of other possible grounds for decision-making.  But as you can see from my exposition of why I did not become a Buddhist despite having a strong affinity for Buddhism, mere affinity is not a sufficient reason for me to make that kind of decision.

So what was it that kept me from becoming Eastern Orthodox?

The historical arguments for the Eastern Orthodox claim to be the one true Church founded by Christ seemed, at first glance, pretty good ones.  In the course of engaging in and observing ecumenical discussions between Catholic and Eastern Orthodox believers, I learned a great deal about what those arguments are and what the counter-arguments are from Catholic and Protestant perspectives.

I learned more about the Filioque controversy, which is a part of the long history of cultural, linguistic, political, and theological disputes that culminated in the Great Schism between most Eastern Christian jurisdictions and the Western Christian (and some Eastern) jurisdictions.  I learned about the sacking of Constantinople by Crusaders as well.

I gained a great deal of sympathy for my Eastern Orthodox brothers and sisters whose forebears in faith were treated poorly, both in the 1st millennium in the buildup to the Great Schism and more recently in the United States where the schism was deepened in some important ways.

I also gained a great deal of sadness regarding the history of fractures between the ancient Christian patriarchates.  Much of what I have read, which is by no means enough to make me an expert, leads me to conclude that in many cases it is our failures to love as individuals, whether Papal envoys, Patriarchs, gifted theologians, Emperors, military leaders, or devout laypeople, which contribute mightily to schism.

As you can read from some of the articles I've linked to in previous paragraphs (all of them from Eastern Orthodox sources), the history is complicated and does not lend itself well to the oversimplifications that tend to get tossed out as arguments for one side or another.

One area where the oversimplifications tend to abound is in the disputes over ecclesiology.  I have learned over the course of several years that the Eastern Orthodox ecclesiology is very similar to Catholic ecclesiology.  I have also learned that, where they differ, there are not clear proofs from the consensus of the early Church to settle the issue neatly, though I obviously favor one side.

My initial assessment of the disputes (after reading the Ravenna document) between the Catholic and Orthodox church was that the big remaining issue was the nature and extent of Papal primacy and authority.

So I was confronted with the question: Who is correct about the nature and extent of Papal primacy and authority?

Is it true that the primacy of the Pope of Rome is a mere primacy of honor, that his role is simply that of a primus inter pares (first among equals)?

Or is it true that the primacy of the Pope of Rome entails the supreme and immediate authority over the Church here under the heavens as described in the Vatican I Council document Pastor Aeternus?  (See an English translation here under Session 4.)

I needed to find a way of deciding the answer to this question.  The early Church writings do not show a clear consensus either way.  The history of Christianity in the 1st millennium also does not show clearly that the definition of the authority of the Pope of Rome in Pastor Aeternus is correct in the sense that it was always and everywhere believed by the early Church.

Nor does that history show that the primacy of the Pope of Rome was a mere primacy of honor.  At times, it appeared to be more the latter.  And at other times, closer to the former.  Neither the Roman Catholic understanding of Papal primacy and authority can be neatly proved from every historical event in early Christianity, nor can the Eastern Orthodox understanding of it be neatly proved in that way.

So, I thought, let me consider the matter another way.  Can either view be falsified?  Or is one simply less probable than the other?

Based on my reading of Sacred Scripture and the testimony of various prominent figures of the Church in the 1st millenium (which you can read at this link), both those I've read on my own and those compiled by others, I tend to think that it's much less probable that the Pope of Rome is merely a primus inter pares.

At minimum, it seems to me that the Pope of Rome was frequently regarded in both East and West as having more authority than the honorific view of Roman primacy would allow on matters of doctrine and Church governance.

I realize that there are very intelligent and well-read Eastern Orthodox folks who disagree with my assessment of the matter.  And it was very tempting for me to join them in that assessment at one point.  I have had my own struggles with authority, as many Americans (and especially former Protestants like me) often do.  Obedience to the Pope has not always sounded good to me either.

But in the end, I am not Eastern Orthodox, much as I love my Eastern Orthodox brothers and sisters, because I believe, like many in the 1st millennium, that the Petrine ministry and authority reside in Rome.

And I believe that it is my duty to obey the servus servorum Dei who, like his venerable predecessor Pope Gregory the Great who exercised Papal authority admirably, believes that, “My honour is the honour of the whole church. My honour is the steadfast strength of my brethren. Then do I receive true honour, when it is denied to none of those to whom honour is due.”

Related: What did I learn from visiting an Eastern Orthodox parish regularly? 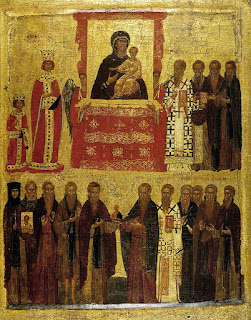 Note: The image is an icon depicting the restoration of icons to the churches under Theodora and Michael III.
Posted by Samuel C Bunch at 5:54:00 PM