Fair Questions: Why was atheism so appealing to me in college?

It was interesting to read this Atlantic article from 2013 and learn something that experience has already taught me: atheists often want a Christianity that they can respect, perhaps merely as as a worthy opponent, and possibly as a serious alternative to their own beliefs.

I can understand that desire.  I also prefer to find defenders of other viewpoints that I can respect because they're well-reasoned, take into account the relevant evidence, and build character when lived out.

Like the students interviewed by Larry Taunton, I took (and continue to take) the big questions seriously.  I had a lot of time on my night shifts while getting my first degree to ponder those big questions, and I still revisit them now that my schedule is less conducive to it.

I first encountered rational and compelling arguments for atheism in my philosophy courses and in online philosophical debates that I thought of as simply a good practice for critical thinkers.  But it wasn't just the Euthyphro Dilemma and the Omnipotence paradox, or the argument from inconsistent revelations, or the argument from parsimony which shaves God from the face of one's beliefs with Occam's razor that made me seriously consider atheistic claims.

These sorts of inductive and deductive arguments were worth wrestling with, and I did wrestle with them, but they weren't the primary driver of atheism on average so far as I could tell from my engagements with atheists.  I'll come back to that.

I was inclined toward atheism in college because it was simpler.  I was an instinctive reductionist, wanting to find the most comprehensive explanation put forward in the simplest terms.  Part of this was because, as I've mentioned before, I was a scientific realist.

The simplicity of the atheistic worldview, specifically the one bound by the epistemic limits of scientific methodology, was a natural fit for my inclinations at the time.  I thought that the accurate answers were the simpler answers that were still internally coherent.

Over time, I came to realize that, given the limits of human cognitive functions, it was very unlikely that the answers which I found to be simple and comprehensible were actually accurate answers.  I also realized that, because reality cannot be described accurately in terms of classical logic, using classical logic to demonstrate the existence or non-existence of God wasn't going to work.

So I abandoned the project of finding an argument or set of arguments that would settle the question of whether or not atheism was the correct position.  But this did not eliminate the question.  The intellect might be agnostic, but the heart must have an answer with which it can live and move.

Speaking of the heart, I found that many atheists brought up the Problem of Evil, and asked heartfelt questions about how a loving God could allow so much suffering to befall so many people.  This is a question that I, of course, wrestled with as well.

I thought that my own sufferings were rather important.  I wallowed in them.  I was so absorbed in looking at the darkness of my suffering and the sufferings of others that it was rare that I looked at the glorious light filling my life.  These sufferings seemed so large, and God seemed so distant while I focused on them.

It should surprise none of us that atheism is greatly appealing to those who believe that suffering is evil (because they believe that pleasure is a moral good).  If suffering is evil by nature (rather than just unwanted), then a God who causes or allows suffering which could be prevented is either evil himself, not a particularly powerful god after all, or just a polite fiction to comfort those who cannot bear the weight of the idea that their suffering is pointless.

And it should surprise none of us that atheism is greatly appealing to those who have been trained (like myself) to trust the scientific community to provide us with true beliefs about the world, to believe that the simplest explanations containing only references to physical processes are best, and to accept the assumption that all mysteries can eventually be fully explained by scientific investigation.

These are influences that affect many people in many countries, and we should expect that where those influences abound in the lives of any person, atheism will become more appealing.  I don't think that my experience with finding atheism appealing in college was all that unique.

It certainly should not have been unexpected.  I found atheism appealing for much the same reasons that others do.

Related:  The Gospel of Doubt 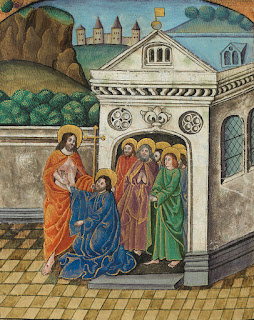 By Unknown - This image is available from the National Library of Wales You can view this image in its original context on the NLW Catalogue, CC0, https://commons.wikimedia.org/w/index.php?curid=44920993


Note: This is called the Incredulity of Thomas, and it shows Thomas placing his hand in Christ's side, as do many of the works of art based on the events described in the New Testament.  The portion of the Gospel of John in which this event is related is the source of the phrase "doubting Thomas" in common parlance.
Posted by Samuel C Bunch at 5:01:00 PM