Previously, I have explained how I came to realize that the Rosary is a Christocentric contemplative prayer.  I also mentioned that I prefer the Dominican way of praying the Rosary for its simplicity, but that is not the only reason I prefer it; I also prefer it because it seems to me to be even more apocalyptic.

The Dominican way of praying the Rosary begins, as does the common way of praying the Rosary, with the crucifix.  As we hold the symbol of Christ crucified, we mark ourselves with the Sign of the Cross, a practice of the early church handed down to us through many centuries and a constant reminder of St. Paul's admonition that we preach Christ crucified. 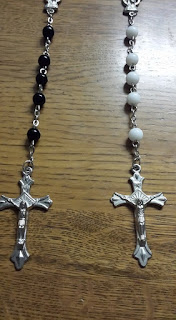 After the sign of the cross which reminds us of the one who made straight the path to the Most High, of the end of the veiling of the mystery of God, we then return to the beginning.  The first Hail Mary is prayed, the reminder of the Incarnation which lead to the sacrifice on the cross, of the first uncovering of the God who is truly with us, the veil of the womb which, like all Christian veils, covers that which is holy.

We then pray that God will open our lips so that we might praise Him, and then we pray that He will help us in our time of need, recognizing that our time of need is always now.  We have seen that we cannot pierce the veil of His mystery by ourselves, that we need His only begotten Son, the High Priest, to pierce it for us.

What follows is known as the Glory Be in English, and in Latin is prayed as follows:


The Glory Be reminds us of the Trinity; the revelation that God is the Triune God.  This revelation which Christ commanded us to acknowledge when he commanded those who follow him to go forth and make disciples of all the nations, baptizing them in the name of the Father, the Son, and the Holy Spirit.

The Trinity is a great mystery of God which none of us understand fully; it is the mystery which is revealed to us when the old mysteries are pierced, torn down so that we can see that the mystery of God is even greater than we had dared imagine, that God is not so small a mystery as a mere unpredictable tyrant casting lightning bolts upon those who displease Him, but rather that God is a family of divine love, an eternal community in true unity who is far beyond our understanding.

After we are reminded of the great mystery of the Trinity, we then announce the first of the Mysteries (Joyful, Sorrowful, Glorious) upon which we meditate as we pray.  The Mysteries are parts of the Gospel which reveal to us God's love for us in the person of Christ and His mother Mary who always points the way to Christ.  And the first thing we do after announcing the Mystery is to pray the Our Father, the prayer Christ Himself taught to those who followed Him.

Christ uncovered for us the mystery of God as a loving Father, to whom we pray as lost sons and daughters who seek to return to our Father's house, we who journey beyond the veil in search of the household of divine love. 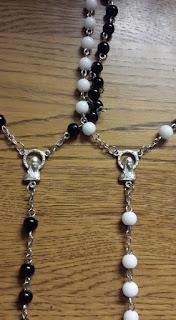 Following the Our Father, we then petition the Mother of God to pray for us, now and at the hour of our death.  Our death is what takes us beyond the final veil, just as Christ's death tore the final veil in the temple.

And just as Mary bore Christ into the world, so too must we follow her example and bear Christ into the world by uniting ourselves to His love which was revealed to us in His suffering for our sake.  Just as Mary uncovered for us the way to love God, with tenderness and joy, so too must we reveal the way to love God by our tenderness and joy toward all those made in the image of God.

Mary is the Holy Queen who bore the King of Heaven, and by doing so in humble acceptance of God's will showed us how to be more fully an image of God, He who humbles Himself in love to save those of us who so often spurn His love.

The Hail Mary reminds us ten times over the course of each of the Mysteries that we will die, that in the end all things will be uncovered.  It is an Apocalypse, revealing to us that the Mysteries show us again and again the way to a Christian end to our lives and the way to follow in the footsteps of Christ so that He might know us at the Final Judgment as His sheep.

Thus the Rosary is apocalyptic, revealing the mystery of God and the path to eternal life by uncovering the Gospel for us over and over, an endless repetition of the unveiling of the Holy One in the Gospels so that we might be granted the grace of final perseverance and see the light of His face in the Beatific Vision.