At Year's End: The Dynamics of Prayer

At the beginning of 2016, I wrote about how a life-permeating discipline had allowed me to grow in ways that made me more loving, and how I wanted to love more, and keep my focus on love.

One of those disciplines was, of course, regular prayer.  And I was already praying regularly, both petitions and contemplative prayer.  I may have smiled as I said it, but I was not joking when I told my boss that my job had been great for my prayer life in the sense that it had given me many reasons to pray frequently.

During the first part of 2016, I was becoming very enamored of the Rosary, and I was even more impressed with it by the end of the year, as you can see:

In the first part of 2017, I took up the scapular as a means of cultivating a deeper commitment to prayer and penance.  I had a strong sense that to love God more fully, I would need practical ways of motivating myself to engage in more sacrificial devotions that further divested me of my selfishness, driving the ego out of more parts of my life in order to make more room for Love Himself.

Shortly thereafter, I decided to pray an hour a day.  At first, I used a prayer book I happened to have that was for Eastern Catholics or Eastern Orthodox laypeople to participate in liturgical-style prayer during the day.  I really enjoyed doing that for a couple months, but as a Roman Catholic I felt the need to align my personal prayer with my regular liturgical prayer tradition, and so I found a nice traditional Catholic prayer book and began using that instead.

Later, the Central Province of the Dominican Order in the U.S. released a mobile app to assist with praying Compline in the Dominican fashion, and I started utilizing it as my night prayer before bed.  That was my first consistent praying of any part of the Liturgy of the Hours.  I had prayed a bit of it before, but it had never become a habit.

This past Fall, I took a trip to Washington, DC.  I visited the Dominican House of Studies, and saw how great it really is to pray the Liturgy of the Hours in community.  Ever since, I've used the Laudate mobile app to pray as much of the Liturgy of the Hours as possible.  It has genuinely changed my life because it has changed my focus from finding moments in which to be productive (and avoid sin) to finding moments in which to be prayerful.

It has also improved my singing, because I am spending about an hour a day in prayer on average, and generally at least half of that is sung prayer.  And that's before I practice any of the chants for Sunday, which adds even more time spent in prayer while reading Scripture.

I still pray my petitions for my family and friends and others I've agreed to pray for (though some days I forget).  I still offer prayers for the conversion of individuals, and pray spontaneously on occasion.  I still pray rosaries while on road trips and on flights.  I still write poetic prayers.

What changed over the past year is not just my habits of prayer, but my heart.  Prayer in its mature form is fundamentally an act of setting aside the ego, whether we ask for what is good for another person, or we praise the Lord, or we ask God to help us grow in virtue so that we can better serve Him.

Doing this habitually re-shapes our character over time so that we become less selfish through a gradual process of stepping more and more often outside of our own attachments to the things of this world.  And instead, keeping our focus more and more often on how we can serve the Lord and His least brothers and sisters.

Prayer is dynamic: it changes us, it motivates us, it grows our relationship with God.  May all of us who pray find the dynamic peace of Christ growing in our hearts, the peace the world cannot give and that same peace which the world cannot take away.

Related:  Love it to Death: Praying from the Heart 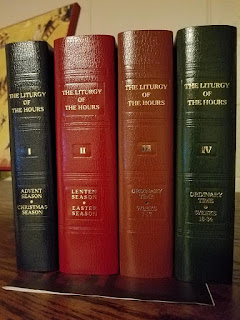 The above is a picture of the 4-book Liturgy of the Hours set that I was given for Christmas.
Posted by Samuel C Bunch at 8:05:00 PM