Love it to Death: The Vestments of Love

Our clothing, as Americans today, is primarily a representation of who we are as individuals.  We might have a uniform we wear to work or in the military as a secondary matter, but the first and most fundamental way we have of understanding clothing is as a matter of personal expression.

In the scope of human history, personal expression has probably always been a factor in clothing choices.  But it was probably very much a secondary factor much of the time.  For the ancients, clothing was much more likely to be primarily a representation of that to which they owed some allegiance, whether it be their tribe, their king, or their family.

When the ancients wore clothing which was a representation of that to which they owed allegiance, it was an act of self-effacement.  Even the messenger of a wealthy king, who would have been dressed quite richly, wasn't dressed richly because he himself was the king, but because he was acting as the representative of the king, and therefore needed to show quite obviously whom it was that he was representing.

On the other hand, if you snub the king's messenger by refusing to feast with him, and then send the messenger back home with harsh words, the king will notice that you do not have much respect for him.  In short, it was generally wise to treat the messenger dressed in the king's colors almost as well as you would treat the king himself.

The Founders of the United States probably understood all this at least somewhat.  Many of them had some close ties to the countries of their forebears in which kings and their messengers were well-known.  We who live in these United States 250 years later, however, are unlikely to ever have known a king, or even lived for long in a country whose king had exercised any immediate authority over us.

I consciously realized today (Palm Sunday) at Mass, that our parish priest was dressed in very fine vestments.  I recognized that these must be fairly expensive garments, and that they were extraordinarily beautiful.  These vestments wouldn't make sense in any other context than representing a king.

Here in the U.S. we have no earthly king.  Perhaps this is why we Americans can find rich vestments on our clergy a bit off-putting.  Having no king, we no longer have an easy cultural touchstone to function as a way to arrive at the understanding that ornate priestly vestments are less a matter of personal expression and more a matter of representation.

It's easy for us to imagine that the priest simply has a personal preference for frilly, fanciful garments.  And based on what I've seen of gossip in these sexuality-obsessed days, it's even easier to suggest with a wink to others that the priest likes such things because he's secretly attracted to other men.

This is an act of the obedience of Love.  To turn over our choice of clothing to the King as an act of representing our King is, in a small way, to show our love for Him by obedience, and thus to love to death a part of our ego.

The childish ego we carry with us wants to keep the focus on our clothing as a matter of personal expression, so that we can get compliments from the people we prefer them from, and perhaps so that those we prefer to offend will be bothered by our clothing.

Christ the King asks us to turn everything over to Him, and to live every part of our lives representing Him who is eternal Love rather than the transient desires of our egos.  This naturally includes how we clothe ourselves, and in a special way it includes those who are designated to act as the King's messenger before the community.

And so the priest wears the vestments of Love, the rich kingly garments that show us vibrantly that it is the King of Kings for whom he delivers a message. 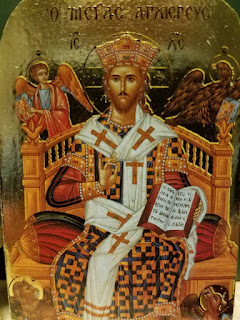 The above is a picture I took of an icon I purchased from legacyicons.com, and it is one part of a diptych depicting both Mary and Christ.  It shows Christ in liturgical vestments, crowned and enthroned in glory with the symbols of the four Evangelists surrounding Him.