Fair Questions: What are the implications of God's presence to all Christians?

Recently, it was pointed out to me that God is not limited to a specific group of Christians, and that God moves very powerfully even among those who may be, shall we say, doctrinally off-base.

Whoever one thinks that doctrinally off-base group of Christians is, the ancient Church, modern Post-Reformation denominations, or just everyone who isn't in our tiny house church down the lane, most Christians would agree that God is not limited to moving in the hearts of only orthodox Christians.

Indeed, I think we would all agree that the Good Shepherd seeks out all the lost sheep so that they might be healed and returned to His flock.  One implication of this is that there is indeed a flock to which we ought to return with Christ.

The question, then, is what it means for us that God moves very powerfully among Christians, even those we think have the wrong doctrines, the wrong practices, or terrible music for worship.

But before we answer that, I think it's valuable to take a broader perspective.  Is God limited to those who explicitly profess Christ as their Lord and Savior?  Does God not move powerfully in the hearts even of non-Christians?

If your answer to that question is yes (before or after reading this atheist's conversion story and this Muslim's conversion story, not to mention the conversion of the Ethiopian eunuch by Phillip the Apostle), then I think we're ready to begin examining some of the implications of this.

After all, if it's important to abandon the wrong beliefs about who God is and become a Christian, why isn't it important to continue to abandon wrong beliefs about God after becoming a Christian?  If a child believes that God gives them teddy bears in exchange for being nice, do we not rightly try to get them to a more mature understanding of who God is once they can better understand Him?

If we love someone passionately, we want to know everything we can about them.  And while we never know absolutely everything about someone, we who love rightly want to know as much as we can.  We desire to know our beloved as fully as we possibly can.  We do not stop learning once we know the basics about them.

The same ought to be true of our relationship with God.  The truth of His being should be something we seek for our entire lives, growing through knowing into an appreciation for the profound mystery of God just as we grow into a deeper appreciation of the mystery of a spouse through knowing them a little bit more as we live with them in love.

That said, one implication I think it would be very difficult to draw from the fact that God moves powerfully in the hearts of all Christians is that we don't need to continue to abandon our wrong beliefs about God, that we can settle into our current understanding and call it good enough.

I never plan to stop abandoning my wrong beliefs about God, His revelation, and His Church.  That may mean changing my religious tradition once again, and I'm entirely willing to do that.  Indeed, I long to abandon anything that keeps me from understanding the Way, the Truth, and the Life inasmuch as I am capable of doing so. 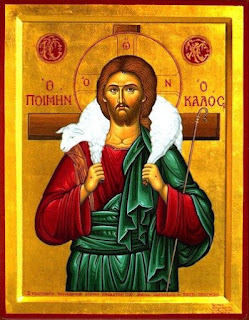 Note: The above is an icon of Christ depicted as the Good Shepherd which I purchased as a gift from orthodoxmonasteryicons.com.
Posted by Samuel C Bunch at 7:05:00 PM