The Continuum of Anglican Prayer Beads

I was completely wrong in my assumptions about the origin of Anglican prayer beads.

My best guess, in the absence of having done the relevant research, was that the Anglican tradition had held on to the practice of using Catholic rosaries in prayer and had simply altered the prayers to suit Protestant theology after the fact.

It turns out that the advent of Anglican prayer beads was much more recent.  Only a few years before my birth, in fact, which stunned me when I learned of it.  Though it probably shouldn't have stunned me.

I've been aware for quite a while of a tendency among post-Reformation Christian groups to suddenly discover ancient traditions of the Catholic Church and incorporate them into their lives.  And the existence of Anglican prayer beads (which have been adopted by some other post-Reformation Christians and subsequently been called Protestant prayer beads), seem to fall under that general rubric.

Just as there are many different ways to pray the Catholic Rosary, there are many different ways to pray using the Anglican prayer beads invented in the later part of the 1900s.  I prayed a couple of those ways with some Irish Anglican prayer beads, and I generally found them to good ways of praying.  That said, the Julian of Norwich version wasn't one I was fond of.

Along the continuum of contemplative prayer using Anglican prayer beads, that's where I lost interest. I'm sure that there are folks who would really love it.  I just wasn't one of them.  It struck me as a bit too modern and sentimental.

But to be fair, the whole thing is apparently a quite recent development out of an Episcopal diocese in Texas, of all places.  Instead of returning to the tradition of wool prayer ropes or rosaries with 5 decades (segments of 10 beads), Anglican prayer beads have 4 weeks (segments of 7 beads).

And all references to Mary are omitted in the Anglican ways of praying with the weeks, which is not surprising given the strong tendency of American post-Reformation Christianity to avoid anything that seems vaguely Marian.

One of the limitations of having 4 weeks rather than 5 decades and shorter prayers seems to be that it's more difficult to stay in a mode of contemplative prayer for the same length of time as a Catholic rosary. This could of course easily be remedied by doing what is often done with the Komboskini (prayer rope) used in Eastern Catholic and Eastern Orthodox circles: simply keep repeating the same cycle of prayers over and over.

This continuation of contemplative prayer is a valuable tradition, and I'm glad to see it being restored in part within the Anglican communities.  I'm not sure if the Anglican Continuum (those who hold fast to what they see as authentic Anglican tradition against the modernizations in the last few decades) would want to take up a decidedly non-traditional practice like Anglican prayer beads.

I will be watching with interest to see if the Continuing Anglican movement consistently finds value in the more ancient aspects of the continuum of Anglican prayer beads. 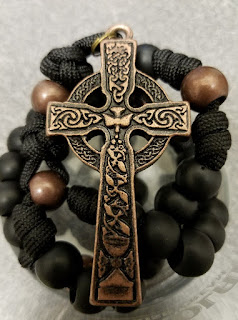 Note:  The above is a picture I took of Anglican rosary beads which I purchased from cordbands.com as a gift.  I highly recommend their rosaries to anyone who wants one that will last.
Posted by Samuel C Bunch at 6:27:00 PM