The Other Side: In Praise of Pulpit & Pen

Recently, there has been a small tempest in the teapot of a certain corner of the Christian blogosphere.  It started with Hank Hanegraaff the Bible Answer Man's conversion, specifically his decision to enter the Eastern Orthodox intercommunion by way of the Greek Orthodox church.

Jeff Maples, who writes at Pulpit & Pen, wrote some articles about his conversion and how to handle it (by evangelizing Hanegraaff to return to the Christian faith).  Maples mentions that he has received some quite negative and uncharitable feedback as a result of those articles.  Specifically, he mentioned that folks were claiming that he misrepresented the Greek Orthodox faith.

I've read his articles, and he does in fact at various points either have a poor understanding of Eastern Orthodox theology or just flat out gets it completely wrong.  Instead of apologizing and doing several years of extensive research into ancient Christian theology to alleviate his lack of understanding, he doubles down on the strategy of doing at best cursory research and making claims which are far stronger than the evidence he's gathered will support.

He visits the church Hanegraaff is now a member of for the Pascha liturgy and writes what I will charitably describe as a reflection on his experience.   As an aside, his reflections are very similar to what a writer in the Church of Christ penned for Truth magazine in an article I read a few years ago.  Except that he wrote the reflection after visiting a Roman Catholic church once.

Let's suppose that I had read a few articles, gone to the Southern Baptist Convention website and read some of their basic beliefs and position statements, and then visited a Southern Baptist worship service on a Sunday morning and wrote something similar to Maples' reflection as if I had done my due diligence and now understood the Southern Baptist faith enough to critique it effectively.

Would any Southern Baptist intellectuals take me seriously when I wrote my polemic?  No.  And rightly so.  I simply would not have a sufficient understanding of their faith to launch a broad polemical attack on their beliefs.  It would be a waste of perfectly good writing time.

All that conceded, I think we should admit that Maples gets some important things right, and so does JD Hall in his article apologizing to the Eastern Orthodox for overlooking their "grave and damning heresies" and promising to more effectively protest against their heretical cult in the future alongside their protest against the Roman Catholic Church.

This consistency of protest is, I think, something they get right.  If they protest against the Catholic communion, they ought to protest against the Eastern Orthodox intercommunion as well.  And Hall is right to apply that consistency in the terminology he uses, calling our Eastern Orthodox brothers and sisters an "anti-Christ" along with the usual use of this term to describe the Bishop of Rome.

This is how the Church of Christ which produces Truth magazine views the Bishop of Rome as well, and they are not shy about articulating their opposition to "Romanist" heresies.   Indeed, "Romanist" is a term necessitated by their view that heretics are not actually Christians, and so a different term that is still recognizable enough to communicate the idea arose to fill the void.

Of course, because their view is that we who belong to the ancient churches are not Christians, we are  seen as not part of the Church (in the sense of being the mystical Body of Christ) and thus not saved, which means that from their perspective we are indeed damned to Hell unless we repent of our heresies.

Respecting this principle means that Jeff Maples who, like all of us, believes that he has found the true faith, is correct to advocate evangelizing those of us who, like Hank Hanegraaff, have worked out our salvation in fear and trembling and studying the Bible until we ended up in the ancient churches.

I respect Maples' desire to refute the teachings of those he deems heretics, and whatever good arguments we might have about the effectiveness of his approach or the historical and Biblical evidence for his views, we ought to admire his sincere commitment to defending the truth.

Maples and JD Hall are, at the very least, not lukewarm in their faith, and that I sincerely respect.  I would rather dialogue or even debate with those committed to the truth than those who are willing to accept only a small part of the Truth, Christ who is the Truth and asks us to give all our strength, our mind, and our soul to love Him.

For this lack of lukewarm Christianity, perhaps we should take a moment to praise Pulpit & Pen, appreciating those who have a passion for the Way, the Truth, and the Life, regardless of whether or not we think them uncharitable toward those they deem heretics or sloppy in their research practices.

I will leave the particulars of the defense of the Eastern Orthodox faith to others who are eminently qualified to do so.  Alithos anesti!

Editorial Note: I was recently informed that JD Hall has a long history of bullying and lobbing insults in place of rational debate or dialogue, even with children.  According to the quotations from the Christian post article, he issued an apology for this adversarial behavior and suggested that he ought to have been more pastoral.

Apparently he committed to "walking away from these conflicts" in light of a teen's suicide that appears to have been at least partially motivated or influenced by Hall's bullying.  I'm not sure what conflicts he meant, whether it was social media verbal battles in general or the children of other Baptist intellectuals specifically.

Either way, I do not recommend engaging with him directly online unless you're prepared to slog through a lot of uncharitable behavior at minimum, even if you are a fellow pastor or pastor's wife. 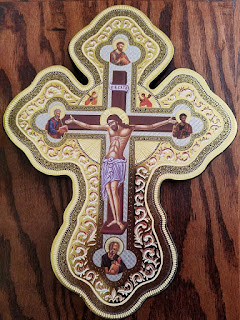 Note:  The above is a picture of a Greek Orthodox cross icon I acquired recently.
Posted by Samuel C Bunch at 6:12:00 PM