Fair Questions: What evidence is sufficient to believe in a supernatural cause?

Previously, I addressed the question asked by Michael Shermer: What would it take to prove the resurrection of Jesus of Nazareth?

I did not think it was actually a very useful question, and so I would like to ask a better question that actually gets at the root of the issue: What evidence is sufficient to believe in a supernatural cause?

There's no particular reason that Shermer and other materialists and/or physicalists can't just assume that there's a natural, material explanation for someone rising from the dead and wandering around.  After all, that's what they assume about many scientifically unexplained events.

So it's not necessary for so many of them to reflexively deny that someone rose from the dead.  What is necessary for the materialist who believes that all things have a natural cause to deny is any claim that some phenomenon (or all phenomena) has a supernatural cause.

And this is, I think, precisely why they object to religions which claim that there are supernatural causes, whether for specific events, or as a first cause of all things.  It would also explain why, when I have asked them specifically what sort of evidence they would accept for claims about the existence of a deity, the responses have been...interesting.

One example from a dialogue I had many years ago with a very bright agnostic atheist.  I asked him what sort of evidence would be sufficient for believing in extraordinary claims.  He proposed video evidence (presumably with audio as well).

So, with some new additional details to make the story a bit more fully-fleshed, I described something very similar to the following scenario as a hypothetical example of an extraordinary claim with video evidence of it:

A woman's mother was dying from a very aggressive cancer, and all the doctors in the United States whom she had been diagnosed by said that there was nothing to be done except make her as comfortable as possible for the last few months of her life.

She found a clinic in Mumbai that was willing to try a new treatment on her mother, and so she and her mother booked a flight to India and got a ride to the clinic in Mumbai.  Because the patients were part of a study which was testing the efficacy of the new treatment, there were video cameras in the rooms.

After they had spoken with the nurses and doctor who was primarily responsible, her mother was placed in one of the rooms, where she would be prepared for treatment.  The day before the treatment was to begin, while the woman was there with her mother in the room, there was a flash of light which temporarily overwhelmed the video camera.

After the light faded, the video recorded a blue-skinned, four-armed figure dressed very strangely who had suddenly appeared in the room.  The figure identifies himself as Vishnu, tells the woman's mother that she is healed, refers to himself as the divine preserver and sustainer of the cosmos, and leaves with her a gold trinket in the shape of a lotus blossom.

There is another flash of light, and then the blue-skinned, four-armed figure is gone again.  The doctor is concerned when the woman tells him of these events that were captured on video, and he has the video checked.  He also has her re-checked for the cancer, and can't find any cancer remaining.

When the woman and her mother return to the United States, none of the doctors they've seen before can find any cancer either.  The woman dies peacefully many years later in her sleep.


So, I asked, in this hypothetical scenario, is the video of these events sufficient evidence to believe that a deity named Vishnu healed the woman of her cancer?

The answer I was given was a resounding, "No."  I was advised that the more plausible explanation is that an extraterrestrial intelligent and super-humanly competent life form had healed her.  Personally, I would accept such evidence as described in the above scenario as evidence of the existence of Vishnu, in the same way that I would accept similar kinds of evidence for other phenomena.

But given the assumptions of a person who believes that all things have natural causes, this is a perfectly understandable response.  It's quite coherent with that worldview.  And it shows us something important about the consequence of that belief: there is no room for any supernatural cause as an explanation for anything if one holds to materialist metaphysics.

For someone who believes that everything has a material/natural cause, there is no possible evidence that is sufficient to believe in a supernatural cause.  They are simply not open, at least intellectually, to belief in supernatural beings or supernatural phenomena.

Even if such a person witnesses, at the end of the age, a bearded Jewish carpenter named Jesus of Nazareth coming with the clouds from Heaven and surrounded by angels with flaming swords, they would have to conclude only that they were suffering from a vivid hallucination, or perhaps that these were just extra-terrestrial life-forms whose origin is purely a natural process of evolution on other planets.

On the other hand, for those of us who have a common-sense standard of evidence, we actually have the ability to be open to evidence of both natural and supernatural causes of phenomena.  And I think that open-mindedness is valuable so long as we have critical thinking processes to help us mitigate our quite powerful and perfectly normal human confirmation bias. 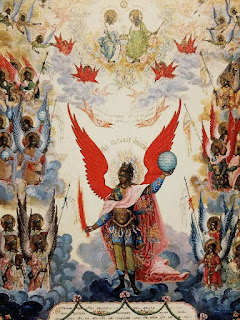 Note: The above is a picture I took of an icon I purchased from legacyicons.com which is depicting Michael the Archangel in Heaven.
Posted by Samuel C Bunch at 8:27:00 AM