Fair Questions: What could prove that Jesus rose from the dead?

In the April 2017 issue of Scientific American, Michael Shermer asks a pointed question just before the celebration of Easter.  What would it take to prove the resurrection of Jesus of Nazareth from the dead?

I'm going to go out on a limb and say that this question is just a distraction.  Why?  I'm so glad you asked for a lengthy explanation.

In cases of healings and recoveries without a plausible natural explanation, people choose to believe one of two general options based on the assumptions that under-gird their worldviews.


These are also two options taken with regard to belief in the death by crucifixion and subsequent resurrection of Jesus of Nazareth.  There are others, of course.  Some propose that Jesus didn't really exist at all.  Or they propose that the Gospel account of his death and resurrection were all lies.

To be fair, that's much easier than being honest and just observing that documentation of eyewitness accounts by people who were risking death by publicly professing Christianity and rejecting the imperial religion of Rome is indeed evidence for his life, death, and resurrection.

Some skeptics seem to think that accepting the Gospels as evidence is proof of the resurrection (and thus they want to claim that the Gospels don't count as evidence at all). But I don't think that's actually the case, which we can see if we carefully consider how evidence works to support a belief.

Let's take as an example the claim that the Earth is round as opposed to a flat plane.  I've seen ships suddenly appear on the horizon, which gives me an intuitive sense that the Earth is not a perfectly flat plane.  I have read written accounts of astronauts journeying to space and looking at the Earth, and I've seen pictures of the Earth looking awfully round from the perspective of one who is orbiting it or moving far away from it.  I've read physicists' accounts of the observational evidence.  Et cetera.

Of course, it's possible that the photos are doctored to give a false impression, that the written accounts are government propaganda, and that my intuition about the ships is wrong and their sudden appearance on the horizon is simply due to my poor eyesight.

We can see from this example that evidence, even what we might think of as strong evidence, is not the same thing as a deductive proof (from geometry, for example).  A correctly-written proof cannot possibly be wrong, given the axioms of geometry.  This is not the case with the wider world.  It can be described in geometric terms, but this would be a paltry description of only a small portion of phenomena.

It would be wrong by being overly simplistic, not because geometry isn't quite valuable.  All this is to say that while we can't straightforwardly prove things in the wider world in the same way that we can in the confines of geometry or other formal logico-mathematical systems, it makes little sense to say that the kinds of things we generally count as evidence are suddenly not evidence at all when we find the claim implausible based on our experience and philosophical assumptions.

That makes about as much sense as many religious folks suddenly lowering the standard of evidence for belief when something strikes them as plausible given their philosophical assumptions and life experience.  After all, the benefit of having a consistent standard of evidence is that it allows us to check our beliefs even when our life experience and philosophical assumptions lead us astray.

But that's not a crazy thing to do.  It's probably the only way we can defeat our confirmation bias.  At the very least, altering our standard of evidence immediately upon encountering something that seems implausible is just giving confirmation bias an opportunity to work its magic, and it's a terrible way to do science as well.

So when I read of the principle of proportionality which Shermer invokes with regard to the ethics of belief, though I recognize that it's intuitively appealing as an axiom, I suspect that it just helps us confirm whatever we already believe by ignoring evidence we would rather not acknowledge.

Such is the nature of confirmation bias, a bias which Shermer has studied at some length among other cognitive biases.  Perhaps for this reason, he might be sympathetic to my concerns about suddenly changing our standards of evidence with regard to claims we believe are highly implausible.

Depending on what precisely that standard of evidence is, we may end up believing that Jesus rose from the dead or we may not believe it.  But at least we would be intellectually consistent because we used the same standard.

All this is to say that there's no particular reason for anti-religion folks to try to claim that the Gospels don't count as evidence (because counting it as evidence doesn't mean one needs to be a Christian), and there's no reason to think that one could prove the resurrection of Jesus of Nazareth inductively by way of textual evidence.  Or anything else, for that matter.

The real question at issue here is not one of proving that a specific event took place.  After all, we can just assume that the Gospel accounts are correct that Jesus was walking around after having been seen dying and dead by many eyewitnesses, and still account for that event by stating that it must have had natural causes (i.e. concocted illusions, eyewitnesses being drugged, et cetera).

The real question at issue here is the question of what sort of evidence could possibly be sufficient to justify belief in a supernatural cause.

Related: What evidence is sufficient to believe in a supernatural cause? 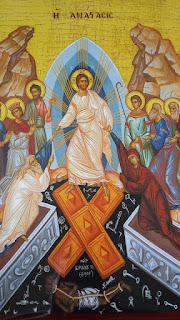 Note:  The above is a picture I took of an icon of the Resurrection I purchased from orthodoxmonasteryicons.com a while ago.
Posted by Samuel C Bunch at 5:59:00 PM